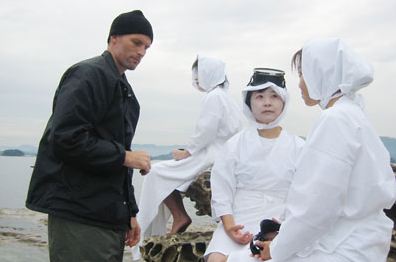 Documentary director Alison Chernick’s newest film, Matthew Barney: No Restraint, sounds like a must-see, and not just for the rare behind-the-scenes footage in includes from the set of the artist’s own latest production, Drawing Restraint 9. [That’s the new one. You know, the one with Bjork. The one shot on a Japanese whaling ship. The one that has people pretending sure, they knew what a flensing knife was before they read the production notes, didn’t you read Moby Dick or something? Same page here? Great, let’s move on.]
No, MB:NR offers some things even rarer in the Matthew Barney-verse: dialogue. explication. edits. time for dinner. [The docu runs an audience-friendly 70 minutes.] From the trailer, it looks like there are some thoroughly objective interviews with disinterested folks like Barney’s dealer, his curator, his Guggenheim director, and his employees. And the film is being distributed by Barney’s distributor, too, who must be considering this a kind of primer for Barney neophytes, a gateway drug, if you will, to vast vats of Vaseline.
But enough snark. I kid because I love, more or less. And I think MB:NR can provide some interesting insights into Barney’s process, if not exactly into his work. Which, given its sculptural, material, and experiential nature, is probably as close as you can get
expect to get.
Matthew Barney: No Restraint debuted at Berlin and in the US at Full Frame, and it’s continuing on the festival circuit. But The Walker Center is also screening the film next Thursday, May 25, at 8pm. See the WAC calendar for details and tickets.
Matthew Barney: No Restraint filmsite [matthewbarneynorestraint.com]
Previous Barneyana on greg.org