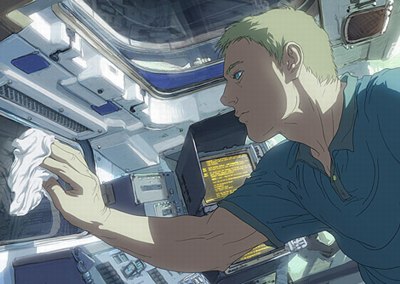 Now I like me some Japanese animation, and it’s been a central element to the AYUAM [As Yet Unannounced Animated Musical} screenplay I’ve got kicking around. But when I first approached a couple of anime studios was shocked–but not, alas, surprised–at their kind of hidebound, orthodox view of the medium. There was not much interest, it seemed, in hybridization or redeployment of an anime aesthetic or even production process that didn’t “fit” [I hate to use that word in this context] within the anime worldview.
Maybe as a gaijin, even one who spoke Japanese, it was already a fait accompli that I was a consumer at best.
So it’s interesting to read about the experience of Gez Fry, a Japanese/British illustrator who, the legend goes, taught himself to draw in Japanese manga/anime style in “just” two years. Obviously, there’s more to that miraculous achievement than comes out in the hagiographic interviews in Ping Mag and Pixelsurgeon.
But the essentials are all there: the guy’s very talented, and he didn’t come up within the rigid, apprentice-y Japanese animation/illustration industry. AND, relatedly, he’s viewed as something of an outsider who tends to work with companies and clients from outside the anime world, too.
GezFry.com [gezfry.com]
How Japanese style Illustration works [pingmag via coudal]
Gez Fry interview [pixelsurgeon.com]