Drawing Restraint, the exhibition of Matthew Barney’s complete series of works of the same name, opened this week at SFMOMA. It originated last summer at 21C Museum for Contemporary Art in Kanazawa, Japan, which was the occasion for the production of Drawing Restraint 9, Barney’s latest film, a collaboration with Bjork.
SFMOMA is the only North American venue for the exhibit, which runs through Sept. 17th. Many of the DR9-related sculptures were presented this spring at Barbara Gladstone in New York, but most of the series hasn’t been seen for quite a while, and definitely not all together.
As if that weren’t enough, the show features a “Matthew Barney Learning Lounge” for deciphering the artist’s work. There’s also an audio tour, of course. But along with Acoustiguides and podcast/mp3 versions, SFMOMA has also made the Drawing Restraint audio tour available to visitors via cell phone.
So if you dial 408-794-2844…whaddya know, it works. Here’s a little directory to the ten audio segments. To heighten the effect, immerse yourself in a vat of petroleum jelly while you listen.
20# Drawing Restraint intro, 4th fl landing, looking at DR14, created by scaling the walls of the museum, then worked his way under the bridge to draw, suspended.
21# DR1-6 videos, objects, and drawings. discussed by Nancy Spector, also videos of DR10-13
22# Path, Notes on Hypertrophy,, etc., drawings that followed the early studio DR works.
23# DR7, 1993, discussed by Nancy Spector
24# Ambergris, explained by Barney: “the idea that the diet of a whale contains things it can’t digest.” 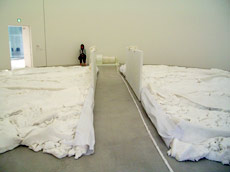 25# Holographic Entrypoint, based on a flensing deck of a whaling ship, discussed along with the Ise shrine by Benjamin Weil
26# Occidental Guest cast from a room used in DR9, with film spoilers by Barney.
27# Occidental Restraint, 1,600 gallons of molded-then-collapsed petroleum jelly, discussed by Nancy Spector, then Barney talking about the connections between whale oil, petroleum, and the cast plastic.
28# Cetacea [left], part of the Field Emblem, discussed by Benjamin Weil.
29# DR8, glass tables containing delicate drawings: “Look closely at those drawings. Quite a few are erotic in nature.”
See exhibition details and download options for Drawing Restraint, which runs through Sept. 17 at SFMOMA [sfmoma.org, thanks to jason]
Ping Magazine covered the 21C Museum and has pictures of the Barney exhibition there. [pingmag]