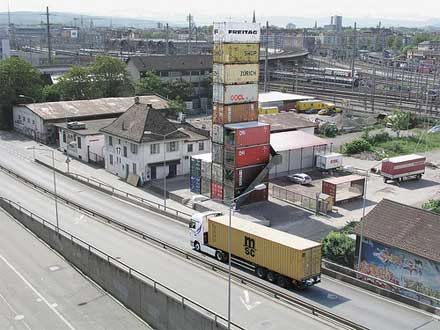 Been a while since I’ve posted shipping container architecture news, but it’s become so hot everywhere else, I’m sure no one minds. This is worth mentioning, though.
Regine interviewed one of the Freitag brothers about the bag company’s new concept store in Zurich, which is made of a tower of shipping containers. It showed up on flickr a couple of weeks ago, too.
But this just reminds me how, every time I drive between NYC and DC, I fantasize about living in a tricked out stack of shipping containers like the ones stacked along the Turnpike. sigh.
17 containers for a concept store [wmmna, with lots of pix]
tons of photos, including official construction/fabrication images at freitag+zurich on flickr [flickr]