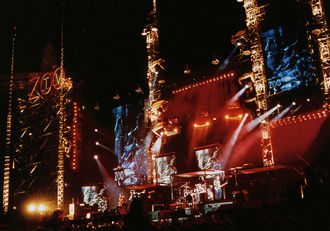 John McKinnon reports in the Wall Street Journal that the White House Press Room is getting a studio-sized makeover, including direct feed video capability and a video wall [as seen here at U2’s Zoo TV tour]:

“Both the planned video capabilities and Mr. Snow’s hiring appear to be part of a subtle but sweeping effort by administration officials to deliver their message directly to the public, particularly through video.”

Meanwhile, Newsweek is reporting [tree, forest, sound] that the renovation schedule was extended from one month to at least nine, and that the press is murmuring to itself that they may not ever get back into the White House at all.
Nothing like a sweeping administration effort to disempower and disintermediate the press to generate…hardly any reporting, criticism, or discussion at all so far.
White House Pressroom Gets A Makeover [wsj]
Extreme Makeover: The Briefing Room Edition [newsweek]