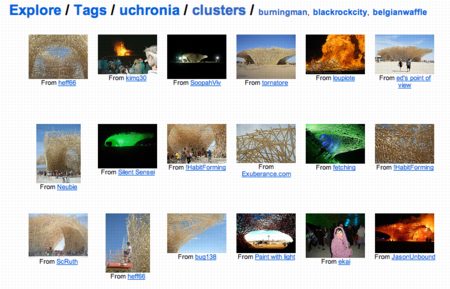 In a previous post, I characterized the Belgian designers behind Uchronia, a giant pavilion at Burning Man constructed by an army of their firms’ employees and others of new wood and then burned to the ground, as “self-aggrandizing eco-idiots.” Christine Kristen, aka LadyBee, the curator of art projects at Burning Man, takes issue with my characterization. The designers are not, it turns out, eco-idiots. Greg.org regrets the error.
LadyBee:

The Belgian project at Burning Man was a stellar example of community and generosity, funded by two Belgian business owners who regularly do community based art projects worldwide. The wood they used was last-quality Canadian wood destined for the dump. Additionally they are planting trees in Belgium equal to the wood used, and all leftover wood was donated to Burners without Borders, a Burning Man group that does relief work in Louisiana and Mississippi.
Get your facts straight before you criticize. You mean-spirited comments make you seem…petty and vindictive. I managed this project for Burning Man and there was virtually nothing objectionable in it. In fact these two business owners are trying to promote community through art-making and are very generous and forward thinking.

Though her explanation doesn’t entirely contradict Treehugger’s description of the wood used as “virgin pine,” it is a welcome correction.
For the rest of my response to LadyBee, see below. And for documentation of the Uchronia brand, check flickr.

Hey Christine,
Thanks for the email. I’m happy to be corrected on the sources of and end results of the wood, and will append your comments in full to my post.
whatever else it accomplished, I don’t think I’ll change my opinion much on the self-promoting, self-aggrandizing aspects of the project, though. The initial reports of the wood that was used and the fate that befell didn’t determine my distate for the Uchronians project in the context of Burning Man, it only intensified it.
It seems to me–a distant observer and someone without a BurningMan.com email address–that building on the deep playa and burning it after the Man were two particular aspects of the project that overshadowed the rest of the mission and community of BRC and BM itself.
If such spectacle is sanctioned or “curated,” that’s fine, rationalize away. But I always considered the self-generating egalitarian and organizational principles of the city to be among its chief accomplishments. And the Uchronians project seemed at odds with that.
To have a spectacle such as this curated puts Burning Man on par with any other institution, and as such, it is open to institutional critique and questioning. If calling out an apparent hypocrisy or the seeming bedazzlement of BM idealists by corporate-tinged advertising and PR–when they’re not calling themselves “the spirituals,” both Belgians repeatedly call themselves ‘art directors’ and reference their major corporate clients in their bios–is “petty,” then so be it. Welcome back to the depressingly real world I always considered Burning Man to be an alternative and antidote to.
As for “vindictive,” though, that is inaccurate and just sounds thin-skinned. I have no target and no reason for vindictiveness.
I’ll be the first to admit I don’t have the expertise to accurately assess the environmental impact of the Uchronian project, or Burning Man itself, for that matter, but at least I was aware of it. I found nothing in any of the writings or in any account of the project that betrayed even the slightest concern for the source, use, or fate of those resources, or the cost to the environment.
I look forward to Burning Man regaining its moral and intellectual lead on environmental and resource matters because frankly, an aura of indefensibility hangs over the whole exercise at the moment. And for better or worse, the Uchronians project embodied that sense of being behind the times. If that is factually not accurate to say so, it is also, unfortunately, perceptionally true.
Ultimately, it’s too bad my criticism was spurred primarily by the success of Uchronians; I initially mentioned it alongside a project by PS1 MoMA–an institution I happen to be affiliated with, though only as a donor/collector. The temporary structures PS1 commissions from young architects for the gravel courtyard of its building in Queens, NY are often formalistically and functionally similar to Uchronians–and they are also unabashedly self-promotional and spectacular, both for the designers and for the institution. It’s precisely the stark contrast between that mode–and Uchronians–and the Burning Man ethos as I perceive it that really bugged. If only I didn’t have such high expectations for Burning Man, then, I probably would’ve been praising the project to the stars. Context isn’t all, I guess, but it is something.
Anyway, this is far too long an email to expect you to read through it all, so if you have, thanks for hearing me out. Thanks for correcting me where I needed it, and best wishes.
Greg