As has been reported before, Ms. Sydney McGee, an 28-year veteran art teacher in a Texas elementary school has been suspended after a parent complained that his/her child saw nude art during a field trip to the Dallas Museum of Art. The field trip had been approved by the principal; there were other teachers and parents along; and the museum reports it has never had such a complaint from a school group in its history.
The teacher retraced the group’s steps for the NY Times, which noted the following nude works:
Figure of a Young Man from a Funerary Relief, Greek; Attic
c. 330 BC Flora, Aristide Maillol, 1911 [which is actually draped with a robe of some sort] And Star in a Dream, Jean Arp, 1958, the nudity of which seems to me beyond the reach of most fifth grade imaginations. There is, however, another Arp that fits the description of “an abstract nude sculpture,” a phrase the principal apparently cited in the suspension:
Sculpture Classique, 1960, which the artist made in a “conscious attempt” to “emulate the basic forms of Greek art.” If this is the offending sculpture, I think there’s a parent who needs a time out. Still, my money’s on the Maillol, if for no other reason than that it looks suspiciously like Paul Jennewein’s Spirit of Justice, 1933, a statue whose exposed breast made John Ashcroft want to–well, let’s let him demonstrate. In a way, this whole story now makes perfect sense. 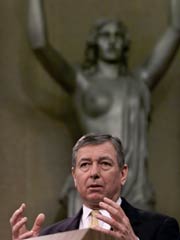