Jason posted a link to a preview for the video game Gears of War that uses Gary Jules’ and Michael Andrews’ acoustic cover of Tears for Fears’ “Mad World” as the soundtrack. 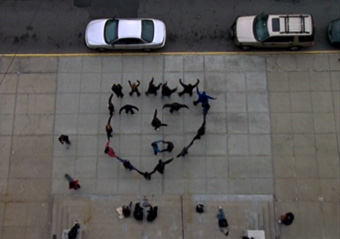 The original music video for Jules’ version is a favorite of mine. Even though the cult of Michel Gondry really bugs, I’m mostly a fan, and I’m a sucker for a well-done tracking shot, especially an outdoor one that can’t involve hundreds of takes because it relies on daylight.
That, and T4F allows me to relive my early teen mopiness and recall those days when my biggest dilemma was not living in London or LA.
Background on the Gondry video; a 2004 Chris Norris review of the video for the NYT. The Gondry video is on the Director’s Cut DVD for Donnie Darko, which restores some of the music from the Sundance version of the film.