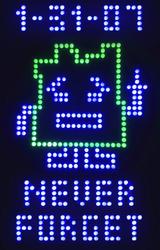 I was beginning to think everyone in Boston, and most everyone in the media, and most certainly everyone in the cable news industry, was a freakin’ idiot. [cf. nearly every angry, belligerent comment by an embarassed official; the smartass reporter asking the tagger when he was gonna get a haircut; the Department of Homeland Security reassuring us that there were “no credible reports of other devices being found elsewhere in the country.”]
But the Boston Globe’s Brainiac blog, co-written by Joshua Green, has saved the day, navigating a level-headed reportorial and analytical path through the fog of media. Good stuff.
Fortunately for Berdovsky and Stevens, the other level-headed Bostonian is the judge, who immediately questioned the applicability of the hoax-related statute. These charges will be dropped and the hysterical politico-media motivations behind them will be recognized. Eventually. Their haircut press conference was almost pitch-perfect. [In contrast, the sudden and total disappearance of Interference, Inc., the ATHF street agency, strikes me as kind of spineless.] 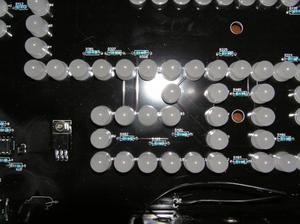 Meanwhile, even as I roll my eyes as the corporate co-optation of street art tactics, I have to admit, I love these Mooninites devices. They’re gorgeous. Graffiti Research Labs, which propagated the LED Throwies idea, took a swipe at the poseur-ish Interference. But I don’t think it’s really fair.
I’m reminded of something Marc Schiller, at Wooster Collective, told me when I wrote about corporate-sponsored street art in 2005 [oh, we were so innocent then]: “Once something’s out there, what matters is how well it’s done.” [nyt]