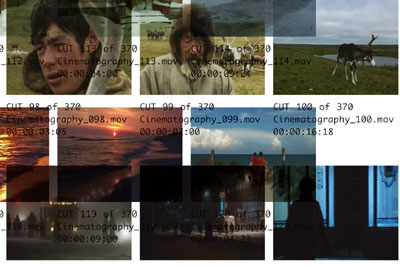 Tobias Rehberger was interested in how viewers construct a film as they watch it, particularly as they pass through alone what’s nominally intended to be a communal experience.
So he decided to make a film in reverse, starting with the poster, and ending with the screenplay. By handing backwards the “end product”, each specialist collaborator interpolated his or her own element of the production. As April Elizabeth Lamm reported on Artforum’s blog:

Ennio Morricone’s score was based on the film’s credits alone, a sweet series of comiclike bones arranged in a tic-tac-toe grid by French design duo Kuntzel & Deygas [who did Colette’s mascots, Cap & Pep, btw -ed.] This apparently suited him: Morricone had told Rehberger that he never needed to see a film before deploying his trademark, universally lauded sound.

It seems ironic that, given the nature of the production and the process, the finished product sounds best suited to an exhibition, not a theater. But then again, Rehberger is an artist…
On Otto by Tobias Rehberger is on view at the Fondazione Prada through June 6 [fondazioneprada.com]
Read about the On Otto premiere party on Artforum [artforum]
See On Otto stills and installation shots like the one above on Designboom [designboom]