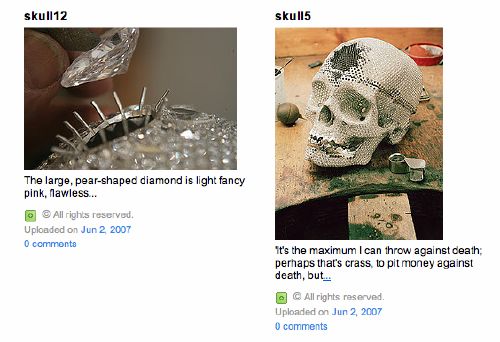 Alright, I will grant that a 54-carat, flawless pink diamond would push the fabrication cost of an 1,100-carat pave’ and platinum skull beyond the $3-4 million I was able to account for.
Still, it’s worth noting that the whisper number for Damien Hirst’s outlay has crept up as well. When his skull went on display, it was $20 million, then it became an unknown amount, was it 10 or 12 million pounds? Now it’s reported as $28 million. Uh-huh.
Anyway, flickr user Red Clover Pix has a set of photos from the construction of the skull. Remarkably, the photos appear to have been on flickr for almost two months, and yet they’ve received only a few dozen views. Were they only made public now?
Red Clover Pix: Damien Hirst’s Skull [flickr via supertouchblog via notcot]
Previously: Diamonds Are Forever! TODAY ONLY!! The Costing Of Damien Hirst’s Diamond Skull