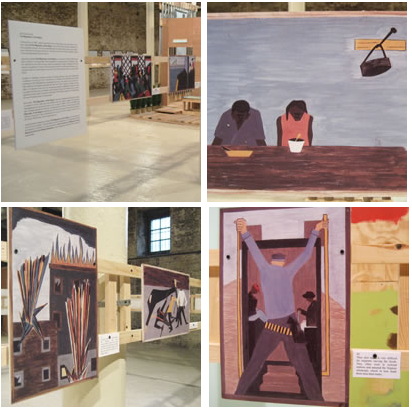 installation shots via triplecandie.org/archive.org
Yesterday Holland Cotter wrote a glowing review of Triple Candie’s current exhibition of the largely white art world’s history of misrepresenting the work of Jacob Lawrence. The show consists of full-size reproductions of all 60 panels of Lawrence’s masterpiece, The Migration of the Negro, which the artist painted in Harlem when he was just 24.

Lawrence was sort of the Jackie Robinson of the white art world, the first African American artist to have a show at a major gallery, and as any young artist, he was expected to be thrilled when the Museum of Modern Art expressed interest in buying his work. Or half of it, anyway.

I don’t know anything about it, but now I have to find out, because it seems that the responsibility for the breakup of The Migration Series–the first instance of what Triple Candie calls the work’s “Ongoing Bastardization”–rests squarely with the Modern’s offer to buy only half the panels.

Triple Candie’s press release for the show has some tantalizing information, but it’s all embedded in a giant, un-indexable web graphic. So I’ve retyped it below, as it appears on the TC site, just to get it out there more. Hope that’s alright.

[2013 update: TC’s website looks to have gone offline this year, though it’s still in the Internet Archive. Glad I got this when I did.
2020 update: Triple Candie lives on, in various project forms and online, cf., a page about this show.]

Exhibitions | Main Space
Undoing the Ongoing Bastardization of the Migration of the Negro by Jacob Lawrence.

Triple Candie is pleased to present Jacob Lawrence’s The Migration of the Negro, in its entirety, for the first time in Harlem. The exhibition consists of offset lithographic reproductions of the artwork’s sixty panels, printed to scale, accompanied by fourteen posters that document some of the ways the artwork has been misrepresented by museums–Museum of Modern Art, The Phillips Collection, Seattle Art Museum, Whitey Museum of American Art [sic?], and others–over the past sixty-five years.

Undoing the Ongoing Bastardization… has been organized to coincide with Jacob Lawrence’ Migration Series: Selections from the Phillips Collection, currently on view at the Whitney Museum of American Art. That exhibition, which was originally scheduled to appear at the Studio Museum in Harlem, presents seventeen of the artwork’s sixty panels.

In the spring of 1941, Jacob Lawrence, then a twenty-four year old Harlem resident, painted The Migration of the Negro, one of the most important artworks of the twentieth century. The sixty paintings tell the story of the great mass departure of African Americans from the rural South to the Northern cities in the decades before World War II.

Lawrence painted The Migration of the Negro in a studio on on West 125th Street with no heat or running water. He considered it a single artwork. Whether it was Lawrence’s intention or not, such an epic artwork presented a major challenge to the art world–And gallery or museum that wanted to exhibit it would have to devote a substantial amount of wall space to the work of a then largely unknown young, black artist.

Almost immediately, museums showed a strong interest in the work, albeit with conditions. In the fall of 1941, the Museum of Modern Art offered to buy half the paintings for $1,000 ($33 per painting). Lawrence, who was on his honeymoon in New Orleans, immediately declined the offer, but at the urging of a dealer who had taken an interest in the work, he reluctantly agreed to splitting the series in half, provided that two purchasers would always make their halves of the artwork available to each other. Several months later, the Phillips Collection in Washington DC, purchased the other thirty panels.
Since then, The Migration of the Negro has been exhibited extensively, though unusually in a form that was inconsistent with the artist’s wishes. For example, Jacob Lawrence retrospectives mounted in 1960, 1974, and 1986, radically misrepresented the artwork, including only five, fifteen, and ten panels respectively. Lawrence was alive at the time of those exhibitions, though he never challenged the museums on the matter; it wasn’t in his character. But he was never happy about it.

In addition to the sixty reproductions of The Migration of the Negro and the fourteen museum posters, Undoing the Ongoing Bastardization… includes, at its heart, a rural wooden shack, not unlike one would find in Jacob Lawrence’s paintings. The exterior, however, is expressively painted with bright color. The interior, which cannot be entered, is decorated with an orange blackboard and a wall-mounted sculpture-like object. The shack evokes both a one-room schoolroom and a makeshift museum, and is meant to serve as a surrogate for Triple Candie.

note: Huh. It turns out ArtCal has published the Triple Candie press release online, though their version doesn’t say “Whitey Museum.” But then, the TC site doesn’t include that last paragraph about the shack.