As they say in the bayou, when it comes to preserving our modernist architectural heritage, you can’t trust a hillbilly as far as you can throw him. 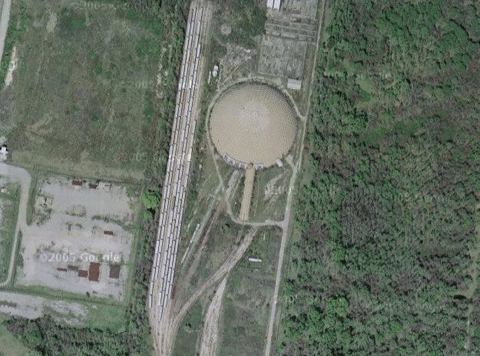 The Union Tank Car Dome, the first industrial-scale geodesic dome, built by Buckminster Fuller in Baton Rouge, Louisiana in 1958, was demolished without notice in November 2007 by its current owner, the Kansas City Southern Railroad. The dome had been the subject of some local preservationist attention for several years, and it would have been eligible the National Register of Historic Places this month.
At 384 feet in diameter, the Union Tank Car Dome was the largest dome in the world when it was built. The 80-foot glass dome inside it was a superfluous flourish, added just because they could. [image below via bfi.org] 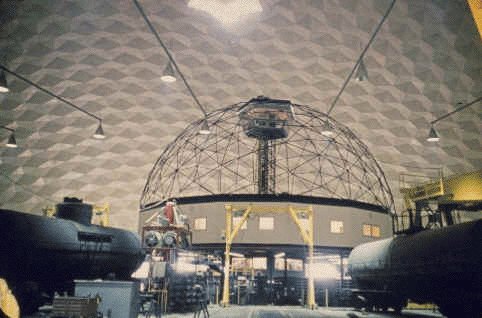 While we all lament the loss of such an architectural treasure and bemoan the predictable philistinism of the owners, let’s also take a quick look at a few mitigating dome factors:
The dome was in the middle of freakin’ nowhere, and I don’t just mean Baton Rouge. Even by Baton Rouge standards, the dome’s in the middle of freakin’ nowhere. The kind of nowhere that’s only 2000′ away from Google Maps’ lo-res image cutoff.
KCS had had the dome for sale for years, dirt cheap [see point above], and willing to go cheaper. In 2001, when a local architect spearheaded an early preservation campaign, the whole place was just $500,000, negotiable. But then the guy moved to England. Oh well.
If the international community of Fuller True Believers can’t rally a measly $500k within 10 years, or entice an architecture collector to buy in the industrial fringes of hillbilly country, just how long should we expect said hillbillies to wait around?
Union Tank Car Dome, RIP, where’s another kick-ass Fuller structure with an ignorant owner just dying for someone to offer to take it off their hands? Architecture’s collectible now, right? So where are the dealers? Where is the registry of sweet, OG modernist landmarks for sale? We’ve seen this with the Paul Rudolph houses, where the only outrage is too late and from people not willing or able to pony up.
What Buckminster Fuller needs is an Eric Touchaleaume and a few Robert Rubins. Touchaleaume’s the guy who dropped into Congo in the middle of a civil war to airlift three of Jean Prouve’s Maisons Tropicales out of the line of fire. With collector-scholar Rubin’s help, he restored and placed two with museums–and sold the third to Andre Balasz for $5 million.
The real problem, though, is that Fuller attracts too many hippies, and anyway, evangelizing organizations like the Buckminster Fuller Institute are more interested in the number of domes and the problems they solve–“Today over 300,000 domes dot the globe.”— than in preserving the currently obsolete artifacts “by” Fuller. If there’s a Fuller Preservation Crisis, they don’t seem too concerned about it.
Demolition of historic “Bucky Dome” a stain on KCS [kansascity.com via things]