I don’t know, is it a good thing to be rustled awake in the middle of the night by a compulsion to write about an exhibition you saw in December? It’s like having a flashback, only to the Elk Grove Village Marriott instead of the Hanoi Hilton.
“The Office” was curated by Ethan Sklar, director at Tanya Bonakdar Gallery, where the show ran from November 30, 2007. Given its focus on the object, material and spatial aspects of the corporate workplace, it’s worth noting that it was “downsized” in January, and was closed [let go?] on February 9th. 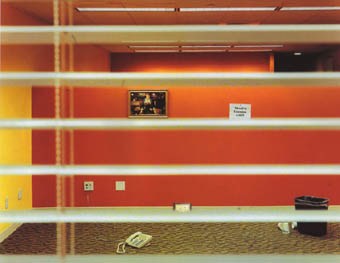 Like hitmen traveling to Europe, it’s the little differences that caught artists’ attention as they explored the cubicle farms and conference rooms, and some of the work has the feeling of self-consciously aestheticized, if not exoticized, souvenirs of the trip: Tim Davis’ Manet/Viacom, a 2002 photo of an emptied out office. Martin Soto Climent’s As yet untitled, a plastic venetian blind draped lyrically off the wall, and Nicole Wermers’ French Junkies #2 a lacquer and steel cube smoking station whose improbably Juddian features are immediately recognizable in the recontextualizing gallery setting. 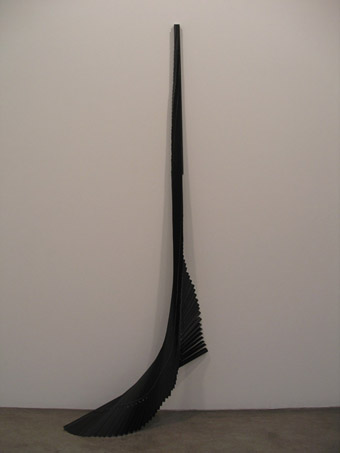 Other artists were attuned to the invisible and overlooked elements of corporate space: Jay Heikes’ The Hill Upstairs was an artfully [sic] stained fragment of a drop ceiling. While downstairs, Peter Coffin installed a generic, grey carpet with the grain set at an angle. The first round of perceptual disequilibrium was definitely physical, as if the walls weren’t plumb, but once I realized what was going on, a reflexive economic disorientation kicked in: if only he’d laid it straight, he could’ve saved 25% on that carpet, easy.
Which got to the crux of Sklar’s curatorial focus on artists exploring “products whose original form and structure [and he adds later, value] are inextricably linked to their functionality, production and utility.” By celebrating objects created or redesignated as art, whose exponentially enhanced value derives from its new-found uselessness, the gallery is the diametric opposite of the office. Or at least it’s supposed to be. 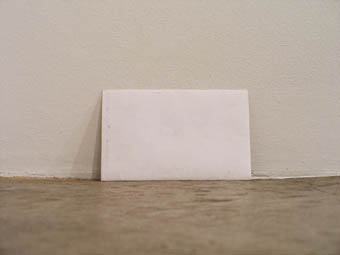 There’s an element of Surrealist perversity to “The Office”: only a very confident collector, with a very conscientious cleaning crew, could take Kris Martin’s la lettre perdue–a 5×7 envelope freshly liberated from its mundane supply room existence and thoughtfully propped against the wall–and return it to his office as his latest art world trophy.
But the irony of the show cuts both ways; after all, its second incarnation was “downsized” to make space for the gallery’s next show. Artists may be highly attuned to the aesthetic and social implications of the corporate environments other people inhabit, but in this week especially, where gallerists are busy adding their personal touches to a warren of identical cubicles at a giant trade show, the differences between “The Office” and “The Gallery” can be very little, indeed. 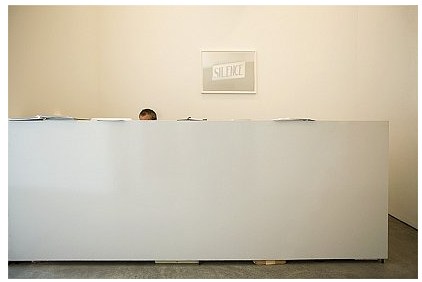 I’m reminded of the indignant reaction when Andy Freeberg showed his “Sentry” series at Danziger Projects last September. His photographs, shot on the sly, capture the uniformly daunting entrance desks of Chelsea galleries. Often, just the top of a nameless attendant’s head peeks out above the stark, minimalist cube. On his own site Freeberg wondered, “in this digital world of email and instant messaging that supposedly makes us more connected, are we also setting up barriers to the simple eye to eye contact that affirms our humanity?” Well, yeah. How else are you supposed to get any work done?
The Office, 30 Nov 2007 – 9 Feb 2008 [images via tanyabonakdargallery.com]
“Sentry,” Andy Freeberg, Sept. 6 – Oct. 13, 2007 [image via danzigerprojects.com]
Andy Freeberg – Statement [andyfreebergphotoart.com]