A scroll back through the recent posts on this site will reveal my fascination with sky surveys, astronomers’ attempts to systematically document in photographs the entire sky.
The broadest such survey, the Palomar Sky Survey, completed in the 1950’s, was also the last to remain unpolluted by manmade objects in space. In a 1995 proceedings discussion of sky surveys, Dr D.H. Morgan noted that survey plate contamination had more than doubled since 1980. Pre-1980, 47% of plates contained an average of 1 satellite trail. Since 1980, though, over 70% of plates are contaminated by satellite trails, with an average of 2.1/plate. Some badly affected plates contain 10-15 trails, which diminishes their effectiveness for astronomical purposes. 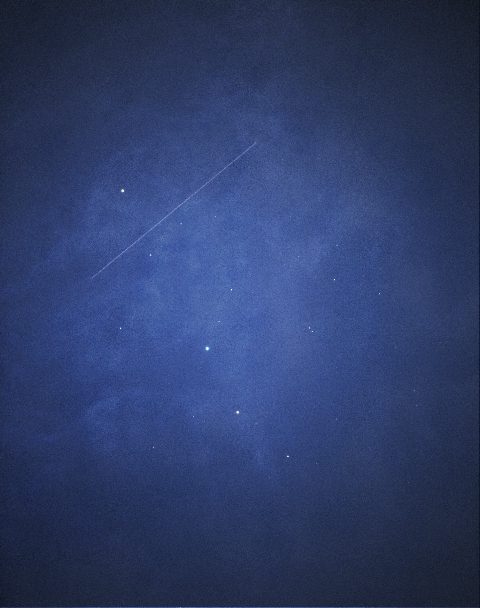 Trevor Paglen,
LACROSSE ONYX II, from The Other Night Sky [via]
Ironically, it’s exactly these sky surveys–or more precisely, their contamination–that is the subject of geographer/artist Trevor Paglen’s next exhibition, which opens at the Berkeley Art Museum/Pacific Film Archive on June 1st. Similar to his extra-long-distance photographs of clandestine government “black sites” and his tracking and documentation of planes used by the CIA for extra-legal renditions, Paglen uses data from amateur satellite-spotting enthusiasts to photograph top secret surveillance satellites in orbit:

Paglen photographs barely perceptible traces of these vessels amidst familiar star fields, in this way borrowing a language of scientific visualization of the cosmos. The multimedia installation at the center of the exhibition The Other Night Sky gestures toward the popular presentation of scientific knowledge in space centers and natural history museums by offering a large-scale globe animated with 189 currently orbiting satellites. Their orbits are traced via complex algorithmic analysis of data. The density of satellites is surprising, their coverage of the globe nearly complete. But the evidentiary function of the work is thwarted—although photographs are named for depicted satellites, faint streaks verify their existence, and the projections track their real-time movements, there is no information to glean from the images about the satellites themselves or their particular roles. And so again Paglen points us to the physical manifestations of the black world, while the images themselves embody the impossibility of translating such an act of seeing into an act of understanding.