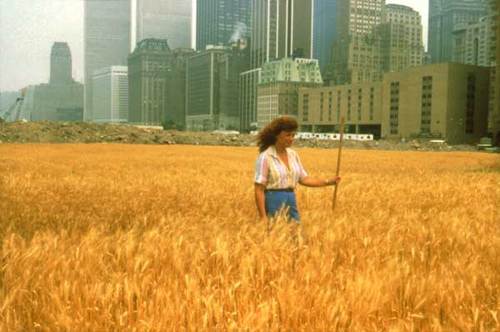 In 1982, the Public Art Fund commissioned Agnes Denes to create Wheatfield – A Confrontation. She planted, cultivated, and harvested two acres of wheat on the vacant landfill that is now Battery Park City.
The image above is one of several at the Chelsea Art Museum site, relating to a 2004 retrospective of Denes’s work. She is also included in a great-looking show at the Sculpture Center right now, “Decoys, Complexes, and Triggers: Feminism and Land Art in the 1970s.” Even though, as I mentioned, Wheatfield was done in 1982. [That’s sculpture-dash-center, btw.]
Interestingly enough, this year’s incarnation of PS1’s Young Architects program is called PF1, Public Farm 1 by WORK Architecture Company. It’s a giant herb, flower, and vegetable garden suspended in a structure of giant cardboard tubes.
Also, in the From Sea To Shining Sea Department, artist Lauren Bon created Not A Cornfield a 2006 public art project which tranformed a 32-acre brownfield site adjacent to downtown Los Angeles into a, well, a cornfield for an agricultural cycle.