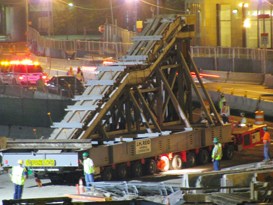 The Tribeca Tribune has some rather incredible shots of the last above-ground element of the World Trade Center, now dubbed the “Survivor Staircase,” being moved on the back of a flatbed truck for the second time this year.
Though it was uprooted from its original site, and it has lost its original base, the stair treads, at least, are being preserved for eventual installation in the WTC memorial/museum.
Watching the care and effort being expended on this deracinated staircase’s behalf, it’s worth remembering their totally arbitrary post-9/11 history. Though they’re revered as the only remaining fragments to survive the collapse of the World Trade Center, in fact, they’re the only above-ground fragments to survive the demolition and clearing and headlong rebuilding of the WTC site. They were damaged during the site cleanup and appear to have survived because they were located on the periphery of an access road, outside the active construction zone of The Bathtub.

The stairs were used to evacuate a day care center in 5 WTC, but when I posted about them in late June 2003 and for a long time afterward, they were apparently ignored. Architect Rafael Vinoly, who lost the competition to design the WTC site to Daniel Libeskind, betrayed no awareness of the staircase. In a speech that month criticizing Libeskind’s overwrought reverence for the Bathtub’s slurry wall–which had already been reconstructed and resurfaced several times by then–Vinoly went so far as to say that there was “no archaeology” left at the site, that every piece of architecture above and below ground had already been cleared.
It was only when they were finally slated for dismantling by the Pataki administration’s Port Authority–with some of the treads being used for the memorial plaza–that preservationists and survivors fought for their future. Last summer, the Spitzer administration announced the compromise: to incorporate the stairs into the stairs leading down to the memorial museum.
As Avi Schick, then chairman of the Lower Manhattan Development Corporation told the NY Times, the stairs would become an interpretive element so that memorial visitors are “experiencing the path of travel just as someone else experienced it.”
More or less.
Survivor Stairs Moved Again [tribecatrib via curbed]
Previously: Archaeology at WTC Site