Don’t mind us, We just need to borrow The Big Board for a minute to take some pictures… 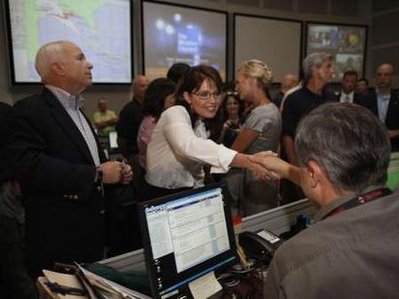 …and to see how Roddick’s doing. No, no, don’t let us bother you. You just keep looking like you’re working.” 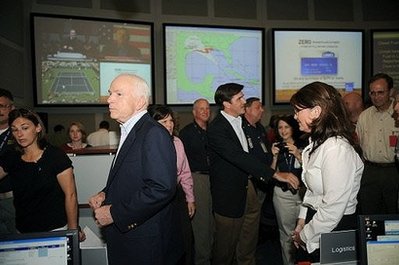 Even war has not disrupted political conventions in recent years, but the extraordinary decision to alter what had been a meticulously planned coronation reflected the powerful and lingering political impact of Katrina. Although convention officials refused to discuss any political links between the Bush administration’s response to Katrina and their current predicament, some Republicans here were clearly hopeful that by quickly shifting the theme of the convention to aiding relief efforts, they could buttress their efforts to show that a McCain administration would represent a departure from Bush. “It’s beginning to creep around the edges that this could be a plus,” said one GOP operative who listened in on a campaign conference call Sunday.

And by “this” he means, “using the destruction from a giant hurricane as the backdrop for McCain’s nomination speech.”
[images: reuters/john gress; afp/robyn beck via yahoo]