I suppose before I order and read Mafiaboy’s book is as good a time as any to mention that the as-yet-unannounced animated musical screenplay I’ve been noodling on is a kind of fantastical retelling of the Mafiaboy hacking attacks and their aftermath.
Starting in 2000, and throughout the whole Mafiaboy saga, I published regular updates and links to news coverage of the search and the trial at mafiaboy.com. It was my my first blog-like web publishing endeavor, but I could never get Grey Matter to work, so I just kept adding posts [sic] to the single html page by hand. I guess I oughta dig that one back up. 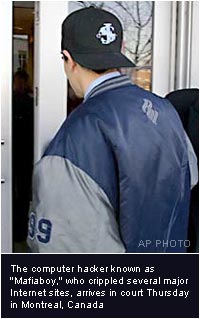 Here’s a 2001 snapshot from archive.org.
My interest at the time was in documenting the superficial lifestyle shorthand the media used to describe hackers generally and Mafiaboy specifically. Because Michael Calce, Mafiaboy, was a minor at the time, the Canadian press was forbidden from publishing his name or picture during the trial. This complicated the press’s attempts to celebritize Calce, though it never stopped them from trying. By the time I took the site down, I’d sold about 20 Rocawear jackets and a bunch of other merch through mafiaboy.com’s affiliate links.
I’m interested to see what the book’s like and how close the media image of Mafiaboy was to Calce’s account–and to see how coincidentally right and wrong my imagination is about what it was like on the inside. Though as the screenplay’s gone through several drafts, the particulars of the real life Mafiaboy’s internals have come to matter less and less–i.e., not at all–to the movie story.
The synopsis on Amazon.ca–and the title–sound pretty broad, and make me wonder if there wasn’t quite enough story to fill a book. We’ll see.
‘Mafiaboy’ writes book about the day he shut down the Internet [nationalpost via, uh, wired, maybe? I forget]
Buy Mafiaboy: How I Cracked the Internet and Why It’s Still Broken [amazon.ca]