Two essays, each interesting and thoughtful on its own, crossed my desk this morning. I think they’re inter-related.
First from the always spatially aware Geoff Managh on the seemingly irrational landscapes of presidential campaigning:

…President Bush had stopped off this morning to speak about the credit crisis “with consumers and business people at Olmos Pharmacy, an old-fashioned soda shop and lunch counter” [1] in San Antonio, Texas. 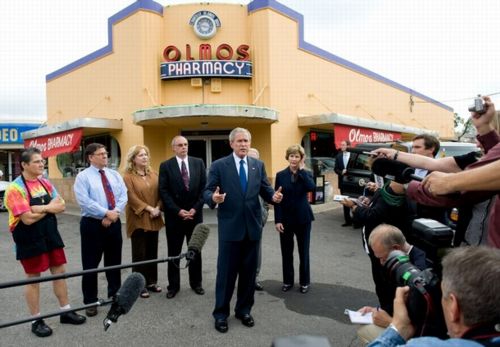 The idea here – the spatial implication – is that Bush has somehow stopped off in a landscape of down-home American democracy. This is everyday life, we’re meant to believe – a geographic stand-in for the true heart and center of the United States.
But it increasingly feels to me that presidential politics now deliberately take place in a landscape that the modern world has left behind. It’s a landscape of nostalgia, the golden age in landscape form: Joe Biden visits Pam’s Pancakes outside Pittsburgh, Bush visits a soda shop, Sarah Palin watches ice hockey in a town that doesn’t have cell phone coverage, Obama goes to a tractor pull.
It’s as if presidential campaigns and their pursuing tagcloud of media pundits are actually a kind of landscape detection society – a rival Center for Land Use Interpretation – seeking out obsolete spatial versions of the United States, outdated geographies most of us no longer live within or encounter.
…
All along they pretend that these landscapes are politically relevant.

Critics who thought Armageddon was a sort of terminal end point for filmmaking (which is to say, all of them except David Edelstein, as far as I can tell) missed the point. Janet Maslin, for example, wrote, “Armageddon tries to tell a coherent story of guts, young love and space travel.” But I don’t think it does try; it’s not really interested. You wouldn’t criticize Star Tours or Batman: The Ride for shoddy characterization or wooden acting, and it doesn’t seem fair to me to treat movies like Armageddon as though their writers and directors had the same goals as, say, Tarkovsky. David Foster Wallace put it best (in “David Lynch Keeps His Head”):

Art film is essentially teleological; it tries in various ways to “wake the audience up” or render us more “conscious.” (This kind of agenda can easily degenerate into pretentiousness and self-righteousness and condescending horsetwaddle, but the agenda itself is large-hearted and fine.) Commercial film doesn’t seem like it cares much about the audience’s instruction or enlightenment. Commercial film’s goal is to “entertain,” which usually means enabling various fantasies that allow the moviegoer to pretend he’s somebody else and that life is somehow bigger and more coherent and more compelling and attractive and in general just way more entertaining than a moviegoer’s life really is…

…
The level of personal wish fulfilment in Armageddon is pretty easy to pick out; it’s worth noting that Michael Bay also sells a kind of national wish fulfilment. Armageddon has a serious hard-on for the early days of the space program, specifically for the sense of national purpose it gave the country. In fact, the movie suggests that that America, that national conception of ourselves, is still pretty much what we are, as you can see below. 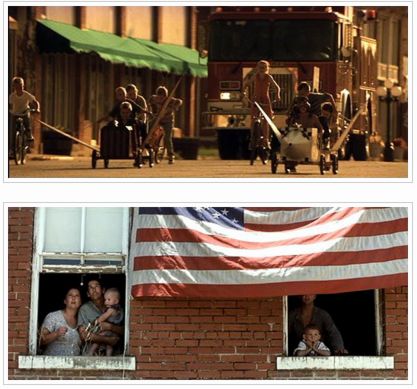 In case you miss it, this shot is immediately followed by one of the astronauts saying “Kennedy, we see you. And you never looked so good!” Of course, he’s talking about the Kennedy Space Center…or is he? The point is, these sections are shamelessly manipulative and there’s nothing delicate about them. Nevertheless, they have an elegiac tone that’s more moving than anything else in the movie. And they seem motivated by a genuine longing for a national purpose, and national heroes, for a more innocent version of America. Of course, that America never really existed, and Armageddon offers Bruce Willis as just the sort of national hero we’re looking for, but hey, you take your pleasures where you find them…

Which makes me think that complaining about the irrelevance of political space is like critiquing the incoherence and narrative of Armageddon. The landscapes of the American political blockbuster are designed to provide wish fulfillment and a sense–however fictional or misguided–of “national purpose”–and ultimately, of a “national hero.”
As this remarkable montage of the US president [2] addressing the world shows, the common landscape of Armageddon‘s politics is the flat, square–and as Dessem points out, time zone-free–space of the television screen:

Minor Landscapes and the Geography of American Political Campaigns [bldgblog via city of sound]
#40: Armageddon [criterioncollection via goldenfiddle]
[1] as the photo shows and a bldgblog commenter points out, Olmos Pharmacy has actually been reinvented as Olmos Bharmacy, “a combination soda fountain counter and wine bar.”
[2] For a second I was worried, but then I realized that it was the other 1998 space-object-destroys-the-earth movie, Deep Impact that had the black president.