The week before the Inauguration, Errol Morris called the White House photo editors of the major wire services and asked them to choose and discuss the photos “that they believe captured the character of [George W Bush] the man and of his administration.” Santiago Lyon, the editor for the AP, toggles incredibly between seeming awareness and professed ignorance of the extent of the influence of the White House’s stagecraft efforts–and more importantly, on the influence on the images the wire service photographers produced. 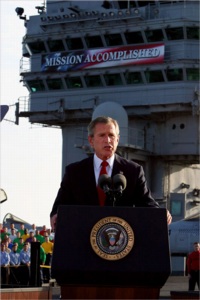 On the one hand, this bafflingly naive discussion of one of the most elaborately orchestrated photos of GWB’s first term, “Mission Accomplished”, followed by a wistful reminiscence of the good old days when the White House really managed your shots:

SANTIAGO LYON: What I wonder about this picture is, Bush didn’t go up there and put the sign up there. His people did, or the U.S. military did, and they ran it by the White House Press Office, who said, “Great idea.” I don’t know the details, but clearly he agreed to speak in front of that sign, knowing that there would be a picture of him with that sign in the background. He has to take responsibility for it. But, you’ve got to wonder, was he really aware of how silly this looked, given that the war was going on?
ERROL MORRIS: Anybody who takes photographs knows that getting the podium, the position of the president, the lighting, the sign in the background, so that it can be framed nicely from certain angles, that’s not something that happens by accident.
SANTIAGO LYON: There were the “Turf Builders,” photographers who accompanied the White House advance teams in the Reagan era, sending one photographer to reconnoiter the photo opportunities on foreign presidential travel. They visited the scenes where the president was going to be photographed and took notes on the locations and distances to assist the photographers who would later travel with the president. They produced a guide that told you what lens to use and what the light was going to be. They no longer do that, but I feel that the existence of such a procedure spoke to the orchestration of White House photo opportunities…

But even when Lyon acknowledges the obvious staging and prop dressing of “Thanksgiving Turkey in Baghdad”:

ERROL MORRIS: Another close-up?
SANTIAGO LYON: There are times when I like close-ups. And then there are times when there are moodier pictures that benefit from more atmosphere, but this was a surprise visit to Baghdad, done under cover of night, photographers not allowed, and media people accompanying him not allowed to tell anybody where they were going, and then arriving in Baghdad for Thanksgiving, that most American of things. And there he is, serving a turkey to men and women of the military. It was the classic photo-op, but also pretty daring when you think that, at that time, Baghdad is a dangerous place.
ERROL MORRIS: Wasn’t there an accusation (at the time) that the turkey was a fake turkey.
SANTIAGO LYON: Yeah, I remember something about that, too. There was something as to whether that was an ornamental turkey. The way these mess kitchens work, there’s no time to actually carve a turkey. It’s all pre-carved and put into hot plates. And the troops move along the counter, and the stuff is slopped into their trays, and then off they go. So we concluded that it was a real bird. But that it wasn’t one that was necessarily going to be eaten at that meal at that time.

Lyon incredibly excuses the fakery because of the photographer’s “daring,” as if riding on Air Force One without telling your boss where you’re going were the equivalent of jumping in a Huey to evacuate a platoon under fire from the VC.
Morris wraps with a quote from Oliver Wendell Holmes about photography as “a mirror with a memory,” but Lyon’s preference for the photographer’s adventure over photographed fiction is not the only example of the limits of photography’s effectiveness as a memory device.
When “Mission Accomplished” was first published, there was no public debate of the kind Lyon says he remembers: “At the time, it produced a raised eyebrow for some, ‘Well, is the mission accomplished? How do you know the mission is accomplished?’ And more importantly, ‘What exactly is the mission?'” If anything, the power of that whole photo-op silenced those questioners until months later, when the continued deaths and violence meant the reality of Bush’s false declaration of victory could no longer be ignored. The questions about “Mission Accomplished” and who’d “declared it” only arose in the fall, almost five months after the USS Lincoln‘s comandeered triumphal homecoming.
Lyon’s recollection of a skeptical reaction towards “Mission Accomplished” is more than a bit wishful, sort of as if, after the war was over, everyone in France claimed to be part of the Resistance. Which might not be how actual members of the Resistance remember it.
Mirror, Mirror on the Wall [errol morris blog @ nyt]