Just because I haven’t yet doesn’t mean I won’t eventually throw out the April 2008 issue of Bookforum on which I scribbled down the following notes last night [ex post facto additions in brackets]:
Eliminate the object of perception and make perception the object
What some people call illusion = “hypothetical space,” [like the guy flying by you on the freeway at 70mph, chatting on his phone, is inhabiting a different hypothetical space than you–for all the good that’d do either of you in a crash]
Ed Wurtz biofeedback, train astronauts to lower heart rate [?]
[People always say] artists experiment, but art is a statement about some thing.
Turrell lawsuit, wife Supreme Court Justice of Oregon – lost [gonna research this one]
Space division [one of his bodies of work]
touch with your eye [a lot of discussion of the interplay between senses]
plumbing of vision
feeling of space
penetration with the eyes [so it’s not just a single moment of realization, but an exploration and gradual understanding, i.e., perception]
[conservative grandmother, “not like those liberal Philadelphia Quakers”]: “Go inside–meaning inside here, yourself–and greet the light.”
Bring the cosmos down into our territory [objective of Roden Crater]
Gathering light [from stars, not reflected light from the moon or any planets] that’s older than the solar system itself [and then comparing it sculpturally/spatially/aesthetically/experientially to other isolated, contained, gathered cosmic light sources/types]
Working on a cenote in the Yucatan [what up withat?]
[from taking a last train ride to Watts] where these towers are just waiting for us to see
[Simon Rodia] went to ____ near Guadelajara to work with Mexican tile craftsmen
Minnaert’s The Nature of Light & Color in the Open Air catalogue of optical phenomena [1954 book by that Dutch astronomer who got that weird, swampy, cavelike physics building in Utrecht named after him in a big way.]
From the Google Books preview, a plate titled, “The Heiligenschein on meadows covered with dew”: 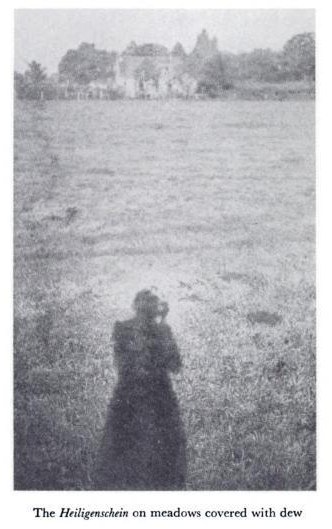