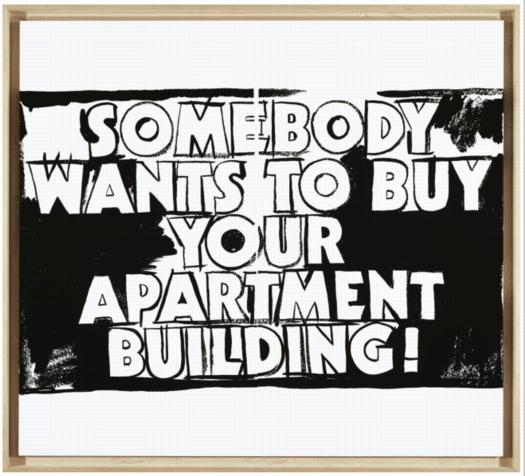 “Somebody wants to buy your apartment building!” Oh, how developers long to hear those words again.
Who could know how or when a work of art transmutes into an icon? Andy Warhol may have had some ideas on the topic, but could even he have foreseen how this large, stark painting, made in 1985-6, would spring from his massive oeuvre twenty years after his own death, to become an emblem of an era?
In the year or two before his death, Warhol created the Black & White Series, large- and small-format silkscreen paintings based on vintage ads which he had accumulated in scrapbooks. In a simultaneous exhibition in London and New York in 2002, Larry Gagosian showed the series in full for the first time, just as the Warhol juggernaut was taking off. I remember seeing that market-making show of works so austere and different from “classic” Warhol and feeling like I was on the edge of an art ocean. “What else do they have stored in those warehouses? Are there just entire bodies of unseen work waiting to appear over the horizon when prices are right?”
Somebody Wants To Buy Your Apartment Building! did not come through Gagosian, though. It bears a Leo Castelli inventory sticker, but it didn’t come through Castelli, either. Its provenance says it was purchased directly from the Estate by a New York collector. Which means the collector had either gotten there after Leo and before Larry, or that the painting didn’t sell in the 2002 show, and it was later bought out of storage.
Either way, in the intervening five years, the Warhol market–and the apartment building market–soared. Somebody Wants To Buy Your Apartment Building! was featured on the cover of the catalogue for Sotheby’s contemporary day sale on Feb. 28, 2007. It was the star of a large [387 lots], motley mid-market sale. It had an extensive writeup detailing its significance and history. Its estimate of $750,000-$950,000 was several times higher than the 2nd most expensive lot of the day. Several somebodies wanted to buy Somebody Wants To Buy Your Apartment Building!, and it sold for $964,000.
How times change. Two years and three popped bubbles later [art real estate, finance], the buyer of Somebody Wants To Buy Your Apartment Building! has brought it back at Sotheby’s. It will be sold on May 13. The estimate this time around: $400,000-$650,000. Unlike similarly price-chopped apartment buildings, though, at least the painting will sell. The desperate seller has placed no reserve price on it. So it’ll go for what it goes for. And we can only hope it’s enough to pay off the mortgage.
May 13, 2009, LOT 221: SOLD WITHOUT RESERVE/ ANDY WARHOL/ 1928 – 1987/ SOMEBODY WANTS TO BUY YOUR APARTMENT BUILDING!/ 400,000–600,000 USD UPDATE: SOLD! for $458,500 [sothebys]
Feb. 22, 2007, LOT 22/ ANDY WARHOL 1928-1987/ SOMEBODY WANTS TO BUY YOUR APARTMENT BUILDING!/ 750,000–950,000 USD/ Lot Sold. Hammer Price with Buyer’s Premium: 964,000 USD [sothebys.com]
Meanwhile, here’s the price floor: Glicee posters of Somebody Wants to Buy Your Apartment Building! are $99-349 on amazon [amazon]