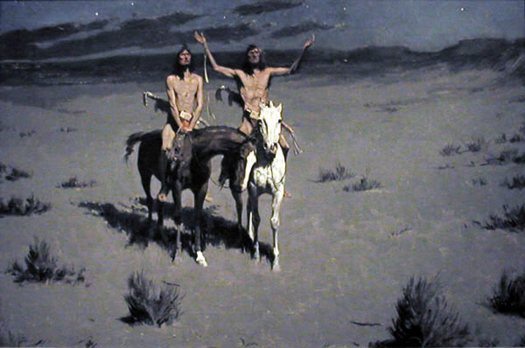 Did you know that the National Gallery had the first show ever of Frederic Remington’s paintings of night in 2003? Me either:

Frederic Remington (1861-1909) has long been celebrated as one of the most gifted interpreters of the American West. Initially, his western images appeared as illustrations in popular journals. As he matured, however, Remington turned his attention away from illustration, concentrating instead on painting and sculpture. About 1900 he began a series of paintings that took as their subject the color of night. Before his premature death in 1909 at age forty-eight, Remington completed more than seventy paintings in which he explored the technical and aesthetic difficulties of painting darkness. 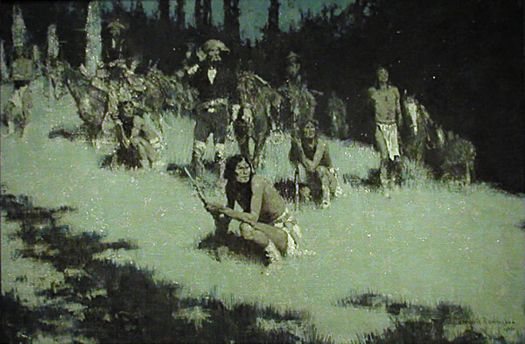 Surprisingly, Remington’s nocturnes are filled with color and light–moonlight, firelight, and candlelight. These complex paintings testify to the artist’s interest in modern technological innovations, including flash photography and the advent of electricity, which was rapidly transforming the character of night. The paintings are also elegiac, for they reflect Remington’s lament that the West he had known as a young man had, by the turn of the century, largely disappeared.

Remington’s interest in painting darkness was indirectly inspired by Whistler, via the 1899 exhibition of moonlit paintings of a Whistler follower, Charles Rollo Peters. 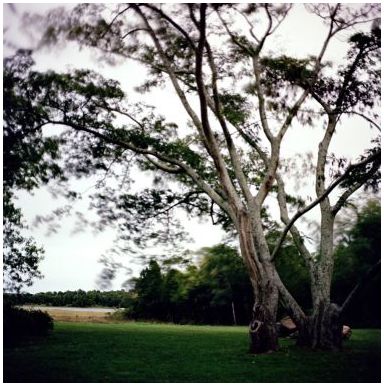 Peters’ and Remington’s moonlit paintings remind me of Darren Almond’s Fullmoon photographs, whose otherworldly colors almost feel like anomalies of the printing process. Which is funny, because the NGA quotes Remington complaining about how hard he finds it to paint color:

“I’ve been trying to get color in my things and still I don’t get it. Why why why can’t I get it. The only reason I can find is that I’ve worked too long in black and white. I know fine color when I see it but I just don’t get it and it’s maddening. I’m going to if I only live long enough.” 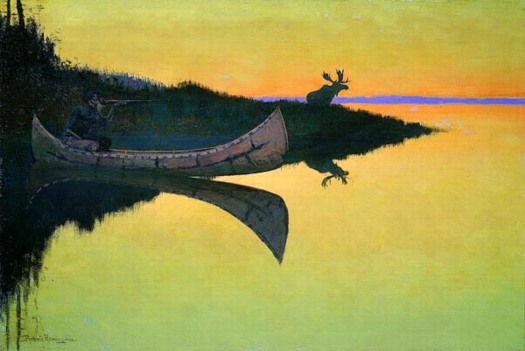 Remington kept on trying to capture the extreme light and color of fireside scenes, and sunsets until his death in1909. As the NGA presents them, they were loaded with uncertainty, melodrama, anticipation, and overwrought interpretations. I’m not sure whether the limits and shortcomings are in Remington or his audience.
Frederic Remington: Color of the Night [nga.gov]
“Museum Quality” painted reproductions of Remington’s night scenes are $55-385 wholesale [chinafineart.com]
images, beginning with the most awesomely titled:
“Pretty Mother of the Night–White Otter is No Longer a Boy,” c. 1900, Bellas Artes, Nevada, LLC
Apache Scouts Listening, 1908, Private Collection
Fullmoon@Springs, 2001
Coming to the Call, c. 1905, Collection of William I. Koch