I’ve had Christy Lange’s long 2005 Tate Magazine essay about revisiting conceptual art systems open in my browswer tabs for weeks now, but I hadn’t read past the Walter deMaria section that first led me to it. Well, it’s just wonderful, and it builds to a wonderfully satisfying failure of an ending. Here are a couple of paragraphs on Jonathan Monk:

In Return to Sender (2004) Monk co-opts On Kawara’s series I Got Up (1968-1979), in which Kawara sent postcards to friends and colleagues systematically reporting his whereabouts. Tearing the pages out of a catalogue that documented the work, Monk dutifully sent the pages back to the original addresses, hoping for responses, yet knowing Kawara had long left the location. “That’s something where the possibility of failure is there before you start,” says Monk. Using Kawara’s own system as a point of departure, he created another, more illogical system, resuscitating a work from the past.
…
What contemporary artists such as Ström, Landers and Monk tap into is not the cold rationalism of conceptual artworks, but the cracks in their objective systems, or the vague, fleeting appearance of insecurity or doubt. Combined with their own conflicts about the system of the art world, what they allow us to see is not the patent successes of previous works, but their occasional futility and failure. While some conceptual art is rigorous and methodical, intellectual and distanced, it can also be paradoxical or daft, emotional or romantic. There is something fragile and fallible about taking on a project that can’t be finished, performing an act that can’t succeed, or creating a work that will never be seen. It is the repeated, unsure attempts and predictable small failures that constitute the self-effacing and endearing quality of meaningless work.

I guess I’ll have to get the book, but Kawara’s I Am Still Alive is typically described as a series of telegrams, and none of the examples I’ve ever seen include a return address. Still, great stuff. 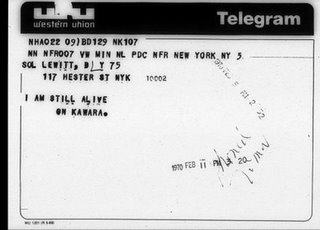 Here’s a tidy description from the book [published in 1981 in an edition of 800] of Kawara’s daily process, which I guess would be easy enough to reverse engineer from his various bodies of work:

Kawara’s days in New York were no different in any respect from those in Mexico. As soon as he awoke, he prepared and sent off his I GOT UP postcard. He spent six or seven hours painting the date. He typed years B.C. on his typewriter. From time to time, in answer to requests for his work or as private communications, he would send telegrams to places around the world saying: I AM STILL ALIVE ON KAWARA. And then, before going to bed, with a slash he would cross off the day on his hundred year calendar.

The book reproduces all of Kawara’s ‘I am still alive’ telegrams through the end of 1977 in original size and chronological order.
Also, this: Variations on I am still alive On Kawara, by Sol Lewitt, pub. 1988 [image via bookendless] 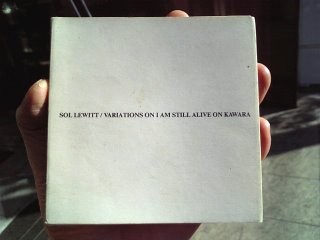