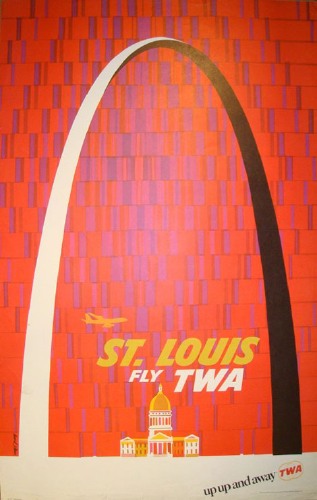 Grain Edit has some truly spectacular gouache/lithograph-based advertising work done for the late TWA by the late David Klein. It’s one truly beautiful poster after another, starting with this piece featuring the Gateway Arch.
Tyler Green just got back from St Louis, where he was blown away by Saarinen’s arch, and rightly so. It is a sculptural and engineering marvel. Seeing as how I’d just loaded up the ol’ blog here with shiny stainless steel sculptures by Walter de Maria, Tyler put forward an interesting idea, namely that there might be some significant-but-under-acknowledged [or under-examined] connection between Saarinen’s arch and de Maria’s own truly great addition to the shiny, dropdead gorgeous Western Sublime, the Lightning Field. Very interesting.
Meanwhile, for my part, I realized that I might have been inadvertently quoting a Klein myself. Because way back when I was still a hardcore suit and setting up private equity funds for whichever giant retailers, I had a crazy idea to make some paintings [I know, right?] of Times Square, where all the billboards were replaced by floating, perspectival parallelograms of solid color.
At the time I was thinking Malevich, especially the photo of the gallery installation of his paintings with that one square black one tucked up into the corner. As I describe it, it probably sounds a little Mehretu-ish, but she wasn’t on the scene yet. 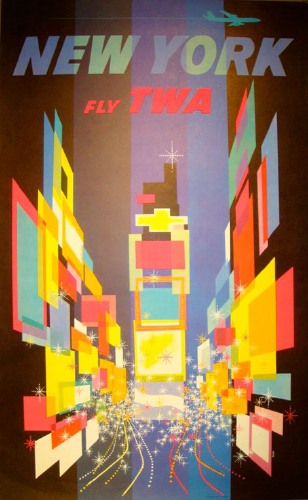 But as I look at it in my head, I recognize it now as the billboards in David Klein’s New York TWA poster–which has been in MoMA’s A&D collection for over 50 years. It’s like I’m running a private install of fffound! in my head, and it takes this long to figure out where all the images actually come from.
David Klein Vintage TWA Posters [grainedit.com]
Fly TWA, David Klein, 1956 [moma.org]
David Klein Art [davidkleinart.com]