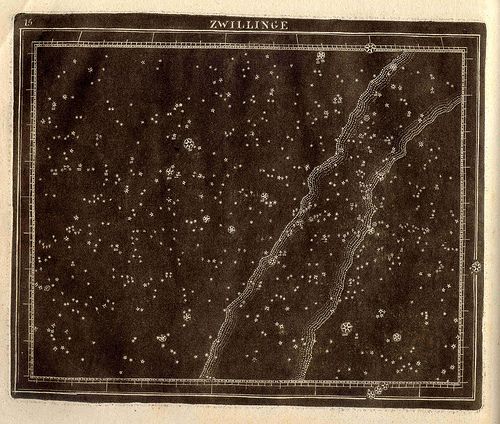 Zwillinge (Twins : Gemini), a 1799 constellation map by Christian Goldbach from his book, Neuester Himmels – Atlas . Here is some discussion of Goldbach’s depiction and technique, from the Linda Hall Library, where a full scan is available:

“The print style and technique was unusual. White stars are shown against a black background. The first pressing was made before the constellation figures and text details were added. These prints looked like a night sky. Then the finished plate was printed once more, providing a comparison with figures. The copper plates were printed in relief rather than the more common intaglio. While not the first to use this technique, his atlas was very influential on those that followed. His maps represent the stars with a Flamsteed projection.”

[image via USNO rare book library by way of bibliodyssey]