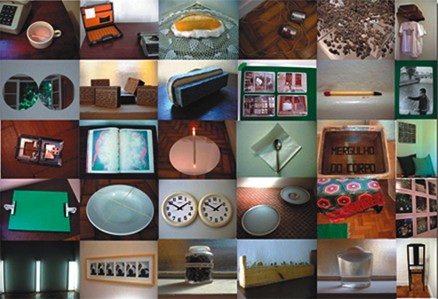 So from what I can gather, Duda Miranda is a fictional collector persona, created by an artist, who collects by fabricating replicas of conceptual artworks. He first exhibited his collection in his [or someone’s] house in Campinas, Brazil, in 2003. But apparently, he kept on making/collecting, and in 2007, the Museu Mineiro in Belo Horizonte, exhibited the collection and published a catalog, which was distributed to “schools and art institutions.”
Included in the collection are replicas of works by Felix Gonzalez-Torres, Cildo Mireiles, Helio Oiticica, Joseph Beuys, Rivane Neuenschwander, Sophie Calle, and Sol Lewitt. From the thumbnails above, it looks like there are early Dan Flavins and Olafur Eliassons as well. A condensed auto-translation of Duda’s 2003 statement:

My collection is simple: do not buy artwork, redo them. For me art is mental and in some way, every time I encounter a job and I am affected by it, I have it or am possessed. So I am led to believe that art is both the artist and mine, she is in the world. And it learned from the art itself, it is learning, learning is built.
My collection is composed primarily of learning. Nothing to do with books. Forget this is perhaps the first step (Beuys: Noiseless Eraser). Collection Duda Miranda is like a series of propositions, each working a proposition. My choice is guided by the method invented to collect, certain jobs require living, give me. Do not build up, a repeat experiment.
The collection that bears my name will be considered false by many – most experts. I learned the power of art is to affect and be affected, the rest is shadow of alien powers.

I first learned of Miranda’s collection project in Irene Small’s Artforum article about the fire that damaged and destroyed many pieces of work by the late Brazilian artist Helio Oiticica. According to Small, Miranda’s “deterritorialization” was a “paradoxical reminder that the afterlives of works of art inhere not in singular possession, but in collective use.”
Also, in exploring the ramifications of the fire for Oiticica’s work and influence, just at a time when his global prominence as a pioneer in so many fields of postwar art practice has been rising, she cites unnamed Brazilian “commentators” who

argued that Oiticica’s works had become fetishized, some going so far as to say that the fire had “liberated” the artist’s ideas from their material cage. Oiticica’s works, according to this reading, are primarily prompts for experience and better conveyed by propositions and writings than by physical remains. Of course, this idealist position also has its market version, as propositions and projects are easily editioned and sold when remade.

It’s remarkable that it’s remarkable that this antipathy toward the “fetishized” or commodified art object has such currency in the Brazilian context, whether in the debate over Oiticica’s fate or official sponsorship and promulgation of Miranda’s self-concious counterfeiting.
For all the griping and, the US/Europe art world still feels like it exists within the market paradigm. And it’s a paradigm which subsumes even the essentialist ideas behind much of the art of the last fifty years. So it’s kind of fascinating to see art in an alternative reality where the concept takes precedence over the certificate.
All that said, I can’t find the supposed online catalogue anywhere, nor can I find anyplace to see or buy the print version. Portuguese readers, help an irmão out?
update: According to this PDF text from her site Marilá Dardot cooked up the Duda thing with fellow artist Matheus Rocha. Thanks to Joao for the info.