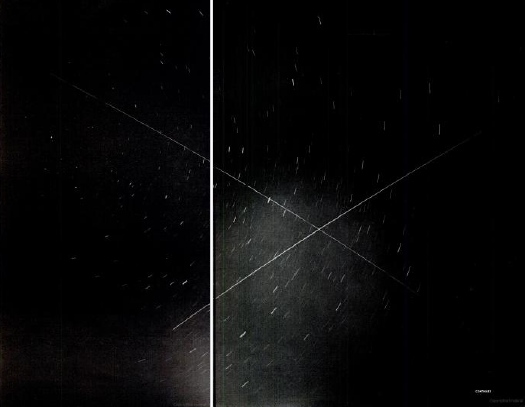 The giant, reflective aluminized mylar satelloons of Project Echo were designed to be seen by the naked eye from anywhere on earth. As I trace down depictions and accounts of seeing them, I wonder how watched they actually were outside the scientific community.
Echo II was launched January 25, 1964. Shortly afterward, scientists at Sandia Corporation calculated the crossing of the two satelloons and snapped this photo, a 6-minute exposure. Echo I [100-ft diameter, 870-mi. orbit] is traveling from the upper left. Echo II [135-ft dia., 670-mi. orbit] is traveling from the lower left. The photo was a double page spread in LIFE Magazine on Feb. 28.
Sandia was a division of Western Electric, a subsidiary of AT&T, which ran the Sandia National Labs in New Mexico. It was a different division from Bell Labs, the division of AT&T which ran the Echo communications system on the ground. Sandia is now owned by Lockheed Martin, which manages it for the Department of Energy.
I think I’d now like to track down some vintage prints of this photograph, and not just the copies of LIFE, which I already hoovered up from eBay.
“Heavy Traffic In Outer Space,” Feb. 28, 1964 [LIFE via Google Books]
Related, but the exact opposite: Trevor Paglen’s The Other Night Sky