The Archive of American Art’s collection of transcripts of Paul Cummings’ interviews with art world figures is always good for a firsthand account and an interesting nugget or reflection. But I don’t think I’ve ever had quite the visceral reaction I got reading Ivan Karp’s account of the emergence of Pop Art in New York in 1961-2. At the time Karp was director of Leo Castelli Gallery. Roy Lichtenstein had just brought in some paintings done from comic books, which Karp and Castelli both found extremely unnerving. Here’s an extended excerpt, but you could really read almost anything and just be hit by the sense of discovery and amusement of Karp’s story:

But we kept I think four of them. And then Leo saw them and had his own set of reactions to them. Which was pretty startling. And we both were jolted. We thought well let’s look at them again; we’ll put them in the racks and we’ll take them out again and see how they feel as the days go by. I told you earlier in the tape about how other reactions were; we showed them to people who came into the gallery. And it was not good. It was a bad scene. There were really truly unpleasant moments there because people thought that if we’d show art like that it would be the end of our situation, that we were pushing things too hard. And we said, “No, no, it’s really an intelligent and original innovation. It’s peculiar and alien and strange and we’re going to look at them some more.” I don’t know if I told you that Warhol, who was a collector to a certain extent at that point, (I didn’t know who he was ) he came in with some young men who had also been buying works from me, and I remember Warhol bought a little Jasper Johns drawing for $350. What a beautiful drawing! Wow!
[ed note: The invoice for Wahol’s Johns drawing, Light Bulb, 1958, graphite wash, 6 1/2″ x 8 3/4″, dated 8 May 1961, is in the amount of $450, which Warhol paid in installments. Here’s the sketch; it was in Sotheby’s Warhol sale in 1988, and it was resold at Christie’s in 1998.] 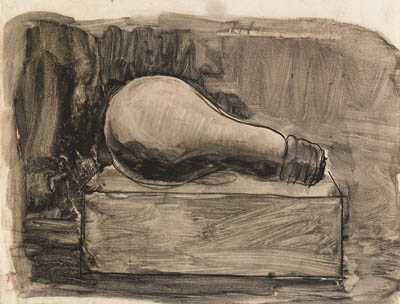 PAUL CUMMINGS: Warhol bought the drawing?
IVAN KARP: Warhol, yes. He came back the next week. And I said, “Oh, there’s a curious painter downstairs that I’d like you to look at; very strange.” (I didn’t know who Warhol was or what he did. All I knew was that he was a man with a crop of gray hair who came in an bought a Jasper Johns from me). He issued one of his curious little sounds like an astonished “Oh!” that he says every so often, which he still says in a state of astonishment. He said, “Good God” — or whatever he was exclaiming — “I’m doing something like this myself!!” He said, “What are these paintings doing here!” Whose work is this! What is this man! What is he thinking!” He was really shocked and at the same time he was appalled. And I think he was very troubled that somebody else was doing the same thing. And he asked me if I wouldn’t come to his studio and look at what he was doing. I said, “Do you mean to say that you’re really concerned with the same kind of images?” He said, “Yes. I actually am doing cartoon things and like commercial subjects. But they’re different, of course; they’re very different. Would you come and look?”

You know, it’s really too long for the front page, so I put the rest of it after the jump.

Warholstar.org’s chronology dates the Nancy painting to Feb-May 1961. Meanwhile, at Warholstars.org’s Lichtenstein page, Gary Comenas has assembled a great collection of other firsthand accounts of people discovering [sic] Warhol and inventing [sic] Pop Art, including Walter Hopps and Irving Blum. Mapping that timeline against Karp’s interview, I think I should probably change the post title to 1961, though, since that’s when a lot of this action was breaking. Warhol was either tipped off to Lichtenstein’s work at Castelli by Ted Carey, or he stumbled upon it with Karp. Lichtenstein saw Warhol’s single frame comic strip paintings before making Mickey Mouse in the summer of ’61, and thus copied the idea, or he didn’t [Since Warhol only exhibited cartoon paintings in the window at Bonwit Teller for a week, and Lichtenstein was in New Jersey, and the dates don’t really match up, I’m leaning toward a parallel development theory myself.] The subsequent success of Warhol and Pop turns out to have a thousand fathers.
Oral history interview with Ivan C. Karp, 1969 Mar. 12