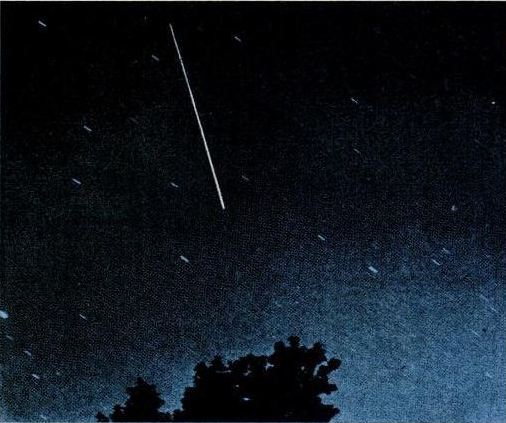 Paul Brodeur in Talk of the Town, The New Yorker, September 3, 1960. The abstract pretty much captures the whole, short piece:

Comment on attending Shakespeare’s “The Taming of the Shrew” at Central Park’s outdoor Belvedere Lake Theatre.
We noticed that many of our fellow-theatre-goers were gazing upward at the stars & summer haze of the night sky…& we followed suit. With the opening lines, we realized that they were still lost in the galaxies overhead. We again directed our attention to the stage. The lord was saying, “Thou art a fool. If Echo were as fleet, I would esteem him worth a dozen such…” & suddenly, brought rigid by the unwitting bard, we turned our gaze aloft, where, shining majestically in sunlight beyond the pale of our night, Echo 1 floated in the west. For many minutes, as the satellite traveled toward its northeast solstice, we sat with tilted head, our spirit swiveling between past myth & future myth. Then, unraveling ourself from our involvement with Echo’s awesome journey, we returned to the bleachers at the Belvedere, and thence to Shakespeare’s Padua, filled with reborn wonder at the mastery of man.

And it turns out Calvin Tomkins himself did a long profile in 1963 of Dr John Pierce, who oversaw Project Echo at Bell Labs. Tomkins seems to focus on what I find most mind-blowing about the Echo satelloons: the whole thing was undertaken by a tiny, informal group, without a giant industrial-scale infrastructure. It was almost ad hoc and bricolage, something akin to making, not manufacturing.
Not sure when I’m going to have the time to read that…
image: a 40-second time lapse from Autumn 1960 of the Echo I satelloon in orbit, published in an extensive “making of/launching of” article in the January 1961 issue of Popular Science magazine.