I find Gerhard Richter’s squeegee paintings to be both endlessly fascinating and seemingly endless. I don’t sweat too much when I think about the one I didn’t buy when I could have; it’s just so hard to decide that this, this one right here, in front of me, is THE one, not the next one I might see and like even better, oh, let’s just wait and see what the next batch is like. Maybe that’s the key to understanding them, the way they thwart or mock such attempts at aesthetic hierarchies. 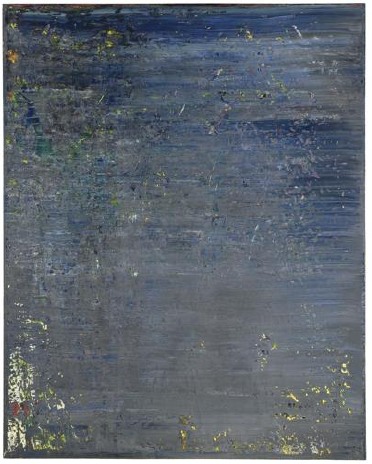 That said, this one, (Abstraktes Bild (666-5)), from 1988, coming up at Sotheby’s evening sale in London, is particularly beautiful, and has a great exhibition history:

…It is the last of a small cycle of five works in this format executed in 1988, one of which is on permanent loan to the Hamburger Kunsthalle (Abstraktes Bild (666-1))
while another is in the Kunsthalle in Emden (Abstraktes Bild (666-2)). The present work is the resolved conclusion of a lengthy process of creation, as described by Dietmar Elger: “the actual making of an abstract painting, which can stretch out over weeks, involves incessant activity, back and forth between opposite poles, with no single element or value permitted to dominate. Richter once described his process for the abstract works as “a multitude of Yes/ No decision, with a Yes to end it all” (Ibid). It also marks one of the earliest instances where Richter started to rescind the use of wide brushstrokes in his abstract work in favour of a rubber squeegee to smear and smudge the paint material across the canvas. This autograph method has since become synonymous with his remarkable output.
[rhapsodic waxing about the harmonies of ultramarine and “the wall power” of Abstract Expressionism removed, but you can read it in the catalogue]
Richter’s working practice has been described as remarkably efficient: he begins by placing a number of white primed canvases around the walls of his studio, eventually working on several of them simultaneously and reworking them until they are completely harmonized, which has been compared by Peter Sager as being “like a chess player simultaneously playing on several boards” (Peter Sager, ‘Mit der Farbe denken’, Zeitmagazin 49, 28th November 1986, p. 34).
Tracts of colour are dragged across the canvas using a rubber squeegee, so that the various strains of malleable, semi-liquid pigment suspended in oil are fused together and smudged first into the canvas, and then layered on top of each other as the paint strata accumulate.
Richter has said “In this process I don’t actually reveal what was beneath. If I wanted to do that, I would have to think what to reveal…that is, pictures that might as well be produced direct…The process of applying, destroying and layering serves only to achieve a more varied technical repertoire in picture-making” (Dietmar Elger, Op. Cit., p. 267).
The painting undergoes multiple variations in which each new accretion brings colour and textural juxtapositions until they are completed, as Richter himself declares, “there is no more that I can do to them, when they exceed me, or they have something that I can no longer keep up with” (the artist cited in: Exhibition Catalogue, Chicago, Museum of
Contemporary Art, Gerhard Richter: Paintings, 1988, p. 108).