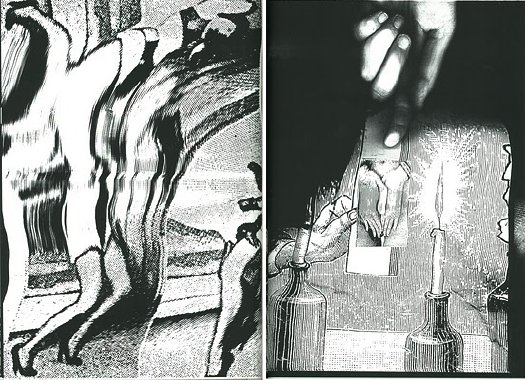 I didn’t follow Sigmar Polke’s work closely. At least not consciously.
This excerpt from Reiner Speck’s essay about Polke’s 2004 artist’s book Daphne is awesome, even if it sounds a bit like someone’s been huffing toner at the end:

An oversize anthology of sources of visual inspiration, a photocopied book that paradoxically reveals the artist’s hand, a sketchbook for the machine age–Daphne runs and runs, is caught by the photocopier, and runs some more, only to be bound in the end.
Created directly by Polke himself, Daphne is a book with 23 chapters illustrated in large-format photocopies. Each “copy” of the book differs, as each has been photocopied and manipulated individually, pulled from the machine by the hand and watchful eye of the artist.
Process is revealed, over and over again. Motifs accumulate page after page, as do small graphic cycles. The printed dot, the resolution, the subject, and the speed all determine and are determined by the apparently unpredictable and often impenetrable secret of a picture whose drafts are akin to the waste products of a copying machine.
Even if the motifs in this book provide but a brief insight into the artist’s hitherto secret files and archives, it is still a significant one.
For the first time, we witness an artist’s book with such an aura of authenticity that Walter Benjamin’s seminal essay, “Art in the Age of Mechanical Reproduction,” bears consequent re-reading.
Produced in a limited edition of 1,000 “copies,” each of which has been numbered and signed by Sigmar Polke.

A thousand copies of a 440 page book [40 pg essay, 400 images], each one manipulated by the artist? How long does that take?
Let’s assume, for logic’s sake, that he made 1000 copies at a time for each A3 page [16.25×11.5 in.], manipulating it around the surface of the copier as the copies fly. The Konica Minolta Bizhub Pro 1050 commercial copy/printing system had a maximum speed of 105 pages per minute. But that’s only for letter-size, and it wasn’t introduced to the market until October 2004. [Newer Bizhub Pro models are up to 160 ppm.]
Which means that the 2003-4 state of the copying art was probably around 50-60 larger pages per minute. Say 50, and we have a nice round 20 minutes of copying time per page, 133 hours of copying. That’s 16.67 8-hour days of nothing but copying. Add in lunch, breaks, maintenance, and you’re looking at three weeks, easy, standing there at the copy machine. Let me repeat the word “copying” again, just for emphasis. Copying.
Now imagine coming up with a suitable repertoire of moves for a page on a glass plate. I mean, how varied can you really get? Do these process-centered motifs and tricks emerge from the book, too? If they could be projected sequentially, like the frames of a movie, the 1000 copies of a single page would compress all of Polke’s moves into a 42-second clip. If the movies for two pages were screened side by side, would they reveal randomness, an identifiable bag of tricks, or perhaps Polke’s carefully choreographed handjams?
Surprisingly, the least expensive copy of Sigmar Polke’s Daphne is on Amazon. $675 [amazon]
More images from Sigmar Polke’s Daphne at Stopping Off Place [stoppingoffplace]
[Inadvertently] Related: Nouveau manuel complet du fabricant et de l’amateur de photos
update: oh no/yeah, it’s a “new york trend”! [thanks, andy]