First, the good news: The Jeff Koons BMW Art Car ran in Le Mans!
The bad news: it totally sucked and crapped out after just a few hours. I know how it feels, Jeff. I once helped organize an all-female driver race team in Le Mans that crapped out after just a few hours, and had to swap a borrowed engine overnight, which the Lloyd’s guy said was covered, no problem, and then when the car wrecked, another insurance snake said there was no coverage, so we and our sponsors were gonna have to eat it, and it devolved into an international lawsuit, all because of this one insurance crook boyfriend of one of the drivers, what a disaster. But an absolute blast nonetheless, so a glass to Koons.
Now more good news: it’s only been a couple of weeks since I put out the call, and already, an artist has deployed the latest digital printing & vinyl wrapping technology to create his own art car! 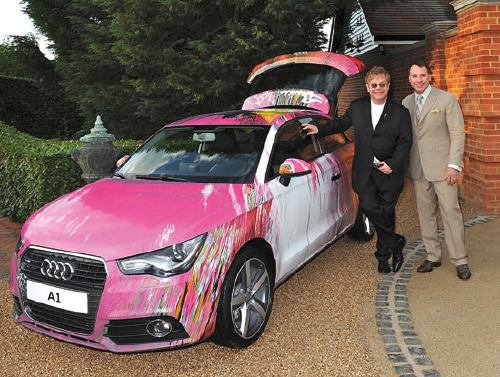 And the bad news: it was Damien Hirst. Before we complain about people cut-n-pasting inaccurate press releases from Rush Limbaugh’s wedding singer about “Hirst spin painting” a new Audi A1 “in his studio,” let’s make one thing clear: Uh, no. 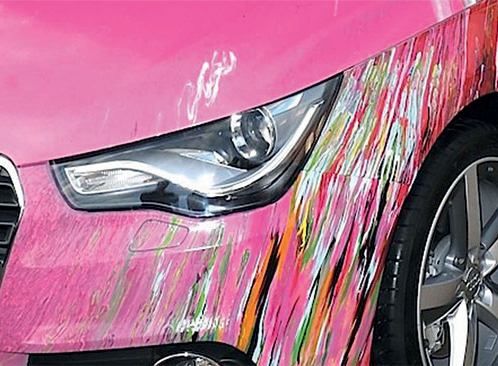 And one more thing: no matter what you think about Jeff Koons or his artwork, you gotta admit, at least his vinyl wrapping crew can match a seam. [via designboom, and propagating fast]
And finally, the good news: I got my fine copy of the first issue of Eye Magazine, and now I can read all the details about that Make Your Own Psychedelic Art Car In 4-Hours With These Stickers! article.
The bad news: Yes, it was Peter Max.