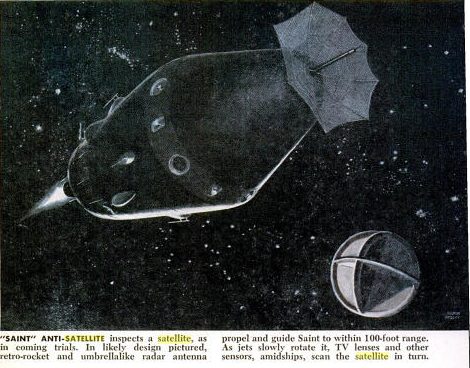 This one’s been sitting on my desktop since April when I posted about that Jan. 1961 Popular Science article about how they made the Project Echo satelloon on a long table with giant clothespins. It was in May, only a couple of months after NASA’s peaceful communications satelloon was made freely available to the world, that Pop Sci informed us of Project Saint, the US Air Force’s program to put the “First Warship In Space.”
That’s Saint on the left up there.
Saint, we read, would disable enemy satellites using one of four techniques: spray paint [for spy cameras’ lenses]; sand [for simulating meteor shower damage]; solar mirrors [for roasting electronics]; or an H-bomb.
Project Saint was canceled in 1962 before any test launches were accomplished.
Oh wait, it wasn’t since April; it was since March. That’s right, April was when I recognized the target, the intersecting circular satelloon depicted on the right. It was called a corner reflector, designed to optimize radar wave reflection, and it was included in the https://greg.org/archive/2010/03/23/shiny_space_balls_yes_please_ill_take_two_no_four.htmlincredible LIFE Magazine cover story from June 3, 1957 about Project Vanguard and the race to launch “the first man-made moon,” a race the US would lose a few months later.
See? Here it is, behind the guy bouncing a smaller Mylar satelloon: 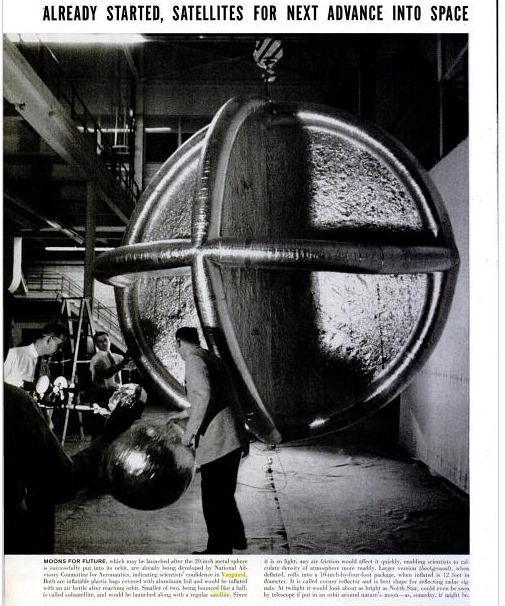