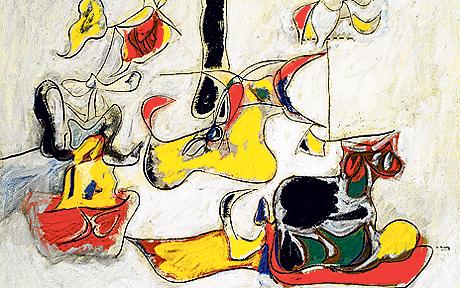 I like writing the word camofleur.
In response to the burning question [sic] that arose from Ad Reinhardt’s chronology, what was up with Arshile Gorky wanting to start a camouflage school in 1943?
Because everyone knows that Gorky was already teaching camouflage in 1942. He’d spent at least a year, and possibly longer, trying to get a camouflage class started, partly because he and other artists saw it as an alternative for getting called up in the draft. “Can’t fight, too busy camouflaging!”
This need intensified after Pearl Harbor, and even after Gorky was rejected by the draft board for being too old. But that was also because Gorky needed money, and a class of 20 students paying $15/each a month sounded very appealing.
[Hayden Herrera has a chapter called “Camouflage” in her 2005 biography, Arshile Gorky: Life and Work. Most of this info comes from there.]
In his prospectus, Gorky wrote, “What the enemy would destroy, however, he must first see. To confuse and paralyze this vision is the role of camouflage. Here the artist, and more particularly the modern artist, can fulfill a vital function, for opposed to this vision of destruction is a vision of creation…
“Mr. Gorky plans a studio workshop in which each student becomes a discoverer…” The coursework would include modern theory, scale modeling, and “abstract constructions.”
One of Gorky’s particular concerns was how colorblindness might thwart camouflage. He also, we read, had “a plan to camouflage the whole of New York City,” which he felt should be promoted heavily by the New York Times.
According to one of his most satisfied pupils, the then-future art dealer Betty Parsons, the class ran for from three to six months, and was highly popular. Of course, according to Harry Rand’s book, Gorky’s camo course “fared poorly.” If the goal was to provide a steady source of income, I guess these can both be true.
And that might explain Gorky seeking help from Reinhardt to revive or rework the camo school idea in 1943. In any case, Gorky’s eventual dealer, Julian Levy, said that camouflage was the key to the artist’s character, whatever that means.
Previously: Civilian Camouflage Council
image: Garden in Sochi, 1943, Arshile Gorky, via Tate, and Telegraph UK