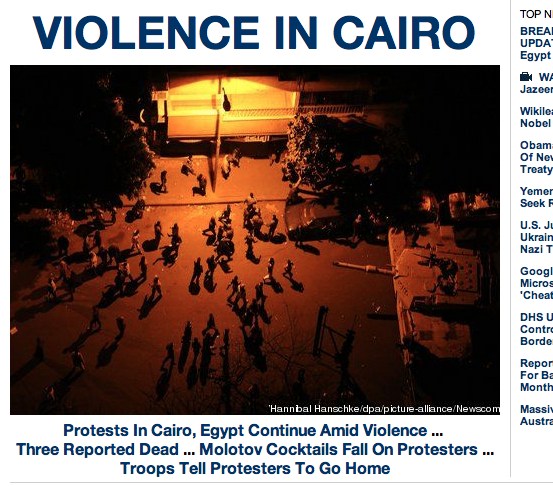 Hannibal Hanschke/dpa/picture-alliance/newscom via tpm
Believe me, I’ve tried, but I can’t look at this photo of protestors under a sodium streetlamp in Cairo and not see Olafur Eliasson’s 2003 Turbine Hall installation, The Weather Project.

image via mark barkaway’s flickr
I don’t often hear Olafur’s work discussed in political or ideological terms. After all, there’s plenty else to say about it, whether its about aesthetics, perception, experimentalism, geometry, decorativeness, even the market. When his work’s theoretical underpinnings are mentioned, it’s pretty easy to nod them away as curatorial rationalization or as quaint indulgence that’s somehow dissonant with the work’s beauty.
It’s probably indicative of art’s debased compartmentalization in the public sphere: art is a commodity, a luxury good, a genteel entertainment, a diversion, anything but a valid or viable or even important or vital participant in matters of power, politics, and culture. [The fact that half the presentations at the College Art Association conference next week will be about art in relation to precisely these forces confirms the larger-scale marginalization of art as much as the live TV broadcast of the Turner Prize announcement.]
But there’s a deep, critical aspect to Olafur’s practice–I hesitate to call it a foundation, because it seems more intertwined, more pervasive. His exploration of the constructs nature and culture, of the function of institutions, and of subjectivity and individual responsibility are almost radically democratic.
Though I haven’t finished it yet, I took the title for this post from Olafur’s 2006 exhibition catalogue Your Engagement Has Consequences, where he argues that time and individual autonomy, a combination he rolls up as “Your Engagement Sequence,” are largely missing from but central to the discourse of art and modernity–and to the construction of reality itself. I guess I’ll read up and report back.
On a more fundamental level, though, I think of how crucial context is to underscoring, altering, or neutering a work’s political implications. I try to imagine restaging earlier [i.e., pre-Sept. 11] Olafur works like Green River, where the non-famous artist dumped, unannounced, fluorescent dye tracer into various urban rivers. It just seems impossible. [The Cleveland-based blogger at Critic Under The Influence writes very nicely about Green River and its context of uncertainty. Can you even imagine the firestorm if you staged Green River on the Cuyahoga? Maybe firestorm is not the best word.]
Previously: Olafur & Dada: What he really wants to do is not direct