In other seemingly obscure art historical news from 53rd Street: while Googling around on Compo Photocolor, I found this mention in a 1964 press release [pdf] from The Modern, which turns out to be a checklist for the newly remodeled and reopened museum’s first dedicated photography galleries, The Edward Steichen Photography Center:

So just like the first exhibition in MoMA’s original 53rd Street building 32 years earlier, the first show in the new building includes photos specifically conceived as a photomural.

[via]
Olson was a well-known Swedish photographer, though from this 2010 bio for him, his MoMA exposure was the source for much of his hometown fame. And unfortunately, the namechecking is hardly mutual. The only mentions of Lennart Olson on MoMA’s website are from the period press releases.
Steichen included Olson’s work in a 1953 survey of Postwar European photography [pdf]; in 1960, Steichen ends the department’s announcement of new acquisitions [pdf] with this: “Of particular interest is an 8-foot wide photographic panel, “Project for a Mural,” (1960) by Lennart Olson.” Which sounds related to the work that debuted in 1964.
In 1960, Olson was also included in an exhibition titled, “The Sense of Abstraction,” [press release pdf], which was organized by Grace Mayer and Kathleen Haven, who had put out a call for hundreds of photography portfolios. [It’s interesting to read that as a corollary to “straight” photography, abstraction meant producing “works whose sole function is to delight–or affront–the eye.”]
Anyway, Olson’s “monumental architectural studies” opened the show; the Museum described them as “abstract through individualistic interpretation of design.” 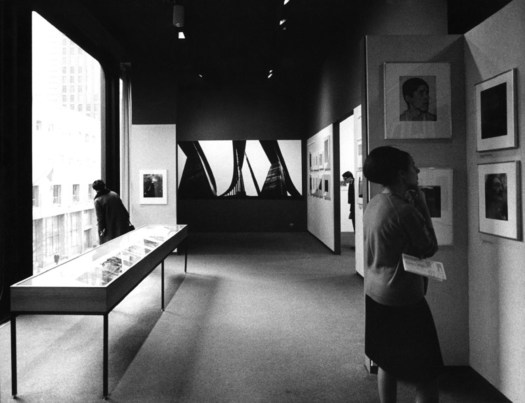 [via]
I can’t find images of the 1960 study, but here is an installation shot of the 1964 mural itself. At first and second glance, the scale and form remind me of Franz Kline, who arrived at his signature large-format abstractions by enlarging small drawings projected onto the wall. 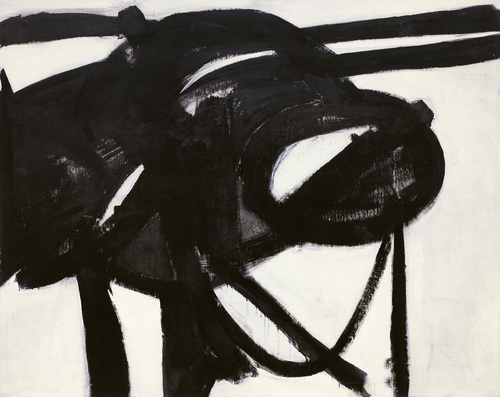 Chief, 1950, acquired by MoMA in 1952
The prominence MoMA gave to Olson’s large, abstract photomural seems to have been confined to the end of the Steichen era, aka the early 1960s. I don’t have any way yet to figure out whether this resonance between Ab Ex painting and large-format photography was conscious or coincidental, but it sure seems convenient.
Talking with artist John Powers today about this speculative painting vs photography dialogue/contest, he suggested looking, not at the artists themselves, but at their mediators: the curators and the museum. It’s easy to imagine curators sharing an attraction to the powerful scale and immersive gallery experience of large, trophy-sized artworks, just as it’s easy to imagine the ambitious size appealing to painters and photographers alike.
On the dust jacket for the book version, Steichen rather immodestly calls The Family of Man “the most ambitious and challenging project photography has ever attempted,” which serves as “a mirror of the universal elements and emotions of the everydayness of life.” Doesn’t sound like he regretted giving up painting much.