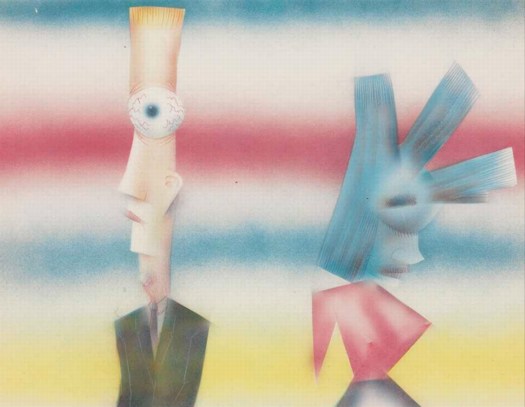 I don’t know how this slipped by me, but now it’s going up for sale tomorrow at Christie’s: a very early Jim Shaw pencil & airbrush drawing from 1981 with the obvious-now-that-you-mention-it title, Mormon Missionary and Prostitute Making Each Other Feel Guilty.
In 1981, Shaw wasn’t even really showing his art yet–the earliest group show in his current, abridged bio wasn’t until 1986. And he was years away from the unveiling of O-ism, his homebrewed, Life of Brian-style, parallel universe version of Mormonism, which he showed at the Swiss Institute and Metro Pictures in 2002. [O, and there was The Donner Party his awesome O-ist reimagining of Judy Chicago’s feminist masterpiece, The Dinner Party, which was at PS1 in 2007.]
Anyway, Shaw was still busy in 1981; Ed Ruscha helped him publish Life And Death, an artist book compilation of airbrush drawings that do look a bit like this Mormon Missionary here. Perhaps they are related.
Lot 30: Jim Shaw, Mormon Missionary and Prostitute Making Each Other Feel Guilty, est. $3000-5000 [christies.com]