Enough Prince! Let’s talk about someone else! Richard Serra, for example. 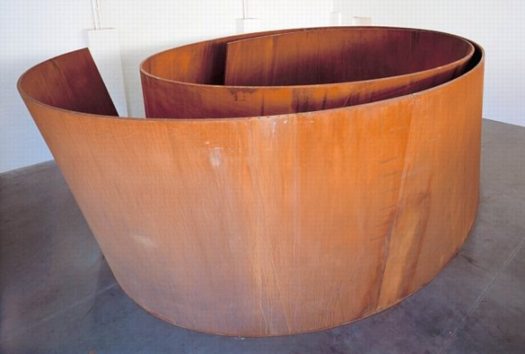 Bellamy, 2001, Richard Serra, image via gagosian.com
Did you know–I did not, which is why I am kind of fascinated to mention it here–that one of Richard Serra’s early torqued spiral sculptures, Bellamy, from 2001, was traded for…for three Richard Prince Canal Zone paintings?

You may remember Bellamy from the Richard Serra sculptures on Google Maps series of posts in 2009. That’s when the first reports of a disassembled Serra being stored in the open air in Port Morris, the Bronx came to light.
As Nathan Kensinger’s photos show, in the middle of that spiral is an I-beam with the name “Bellamy” scrawled on it. Which has led everyone from Kensinger to me to the New York Times to speculate that the work is, in fact, Bellamy [top], which was first exhibited at Gagosian Gallery in 2001.
But in 2009, Mary Walling Blackburn noted that Bellamy was actually in England, not the Bronx. Fine.
But in October 2009, when he was giving his deposition in Cariou v. Prince et al Larry Gagosian explained how he traded three Prince paintings–Back to the Garden, Cookie Crumbles, and Rasta 2008.0044–to an unidentified client for Bellamy back in late 2008 or early 2009.

Q. –we’ll call him again Mr. X– well, let’s call him Mr. Y because we already had Mr. X.
Mr Y gave you a sculpture? I mean, I’m not sure I’m following you. What did Mr. Y give you?
A. I’ll tell you exactly what happened, okay. Mr. Y was interested in buying some of these paintings, but then they decided that they were having a cash flow issue or whatever and so they suggested that I take a work of art that they owned in lieu of cash payment as an even exchange for those three paintings.
Q. So Mr. Y or they, whoever–is it more than one person? You can tell me that.
A. There’s one person.
Q. One person. So Mr. Y–
A. Right.
Q. –got those three paintings–
A. That’s right.
Q. Back to the Garden, Cookie Crumbles–
A. Right.
Q. –and one of the untitled paintings?
A. That’s right.
Q. And in exchange you got a sculpture?
A. That’s right.
Q. By whom?
A. Richard Serra.
Q. And what’s the value of that sculpture?
Ms. Bart: Objection, form.
A. Three to four-million dollars.
Q. And who owns the Richard Serra sculpture now?
A. I own it.
Ms. Bart: Personally?
Q. And what did–personally?
A. I mean the gallery owns it.
Q. And what did Mr. Prince get?
A. He got his percentage of the agreed-upon prices.
Q. Okay. I think I understand. Thank you.
I’m going to show you what was marked Tuesday as Plaintiff’s Exhibit 36. Before we get into this document, when did you exchange Cookie Crumbles, Back to the Garden, and the untitled Rasta for the sculpture?
A. I don’t–I don’t know the exact time.
Q. Was it this year?
A. It was probably early in the year. I would just–I’m just guessing.
Ms. Bart: Don’t guess.
A. I don’t recall. I don’t recall.
Q. Just going back to Exhibit 58 briefly. This exchange about those three paintings having been sold was in September 2008, does that help you at all?
A. What are you–does it help me with what?
Q. To remember–I could be misspeaking. Hold on a second.
Yeah, September 2008 is–these emails in Exhibit 58 say it was in September 2008 that Back to the Garden, Cookie Crumbles and the untitled Rasta were sold. Does that– it might not–
A. It really doesn’t help in this particular case because initially it was going to be a cash transaction, and then there was quite a bit of time, and then tehy said we don’t have the cash, will you do this.
Q. Okay, I got it.

So all this was going down while the bloggers were waking up to Serra from the dock, but also during the financial crisis of 2008. In the midst of which, Gagosian manages to buy a foundational Serra for basically Prince’s 60% of around $3.5 million, or $2 million. Nicely done.
Meanwhile, it’s tempting to publish another book–The Gagosian Depositions–with NO art historical value, but which is Gawkerish fun to read. Compared to the other folks, I came away from the transcripts really liking Larry Gagosian. He was sharp, readily called out mistakes made by Cariou’s counsel, and noted how they seemed to take so many breaks. Definitely not a guy who is intimidated by lawyers, and who values his time at more than $600/hr.