I recently found a poster for a Pontus Hulten exhibition at Moderna Museet called “Utopier & Visioner, 1871-1981,” which I think may have come from Billy Kluver’s own collection.
There’s not much information online about the show with that title, but the Getty mentions it; they hold the archives for E.A.T., the art & technology collaborative Kluver founded with Rauschenberg and Robert Whitman.
Turns out “Utopier & Visioner” was the site of one node in E.A.T.’s project, Telex: Q&A, an early attempt at networked communication. E.A.T. set up public telex machines in Stockholm, Tokyo, New York [at MoMA] and Ahmedabad, India, and invited people to ask each other questions. Hulten’s show provided the theme; the dates in the title referred to the Communards and to imagining what the world would be like ten years into the future.
1
Questions about the future would be daisy-chained along to the different venues to give people a chance to read and respond. [The connections were not real-time; data was only transferred 10 minutes/day.] And to prime the pump, “wise men” in each city were invited to offer their answers as well.
E.A.T. was planning to publish the resulting conversations, but I can’t see that they ever did. The Getty has several folders stuffed full of telex strips collated into roughly chronological order. It might be interesting to look through them. 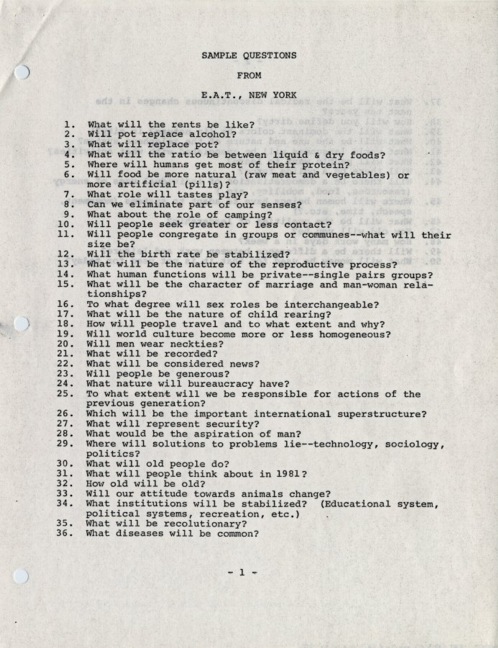 Or maybe, uh, not. The Daniel Langlois Foundation in Quebec has digitized some materials from E.A.T.’s archives, including the original press release for Telex: Q&A, which contains sample questions:

1. What will the rents be like?
2. Will pot replace alcohol?
3. What will replace pot?
4. What will the ratio be between liquid & dry foods?
6. Will food be more natural (raw meat and vegetables) or more artificial (pills)?
20. Will men wear neckties?
24. What nature will bureaucracy have?
29. Where will solutions to problems lie–technology, sociology, politics?
49. Will there be a difference between work and leisure?

Maybe I do want to know Kenzo Tange’s opinion on neckties, but frankly, it’s almost interesting enough to think that in 1971, people were seriously expecting dramatic changes would sweep through society. I mean, sure, Twitter and all, but still. Pills! 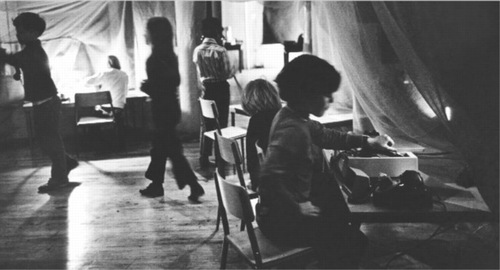 Telex: Q&A was closely related to another E.A.T. project in 1971, Children and Communications. Led by Robert Whitman, E.A.T. set up kid-sized labs in the various boroughs of New York, and connected them via fax and telex, and let kids loose in them to communicate with each other.
Langlois has some of those documents up, too; it’s kind of hilarious, in that except for a tictactoe game, and an attempt at an exquisite corpse-style story, most of the interaction is about the interaction itself. Just like Thaddeus S.C. Lowe’s first telegram from a balloon to like 90% of cell phone calls today [“I’m calling from the train.”] My favorite is this drawing, which pretty much sums it up, a screen asking the kid, “Who do you love?”: 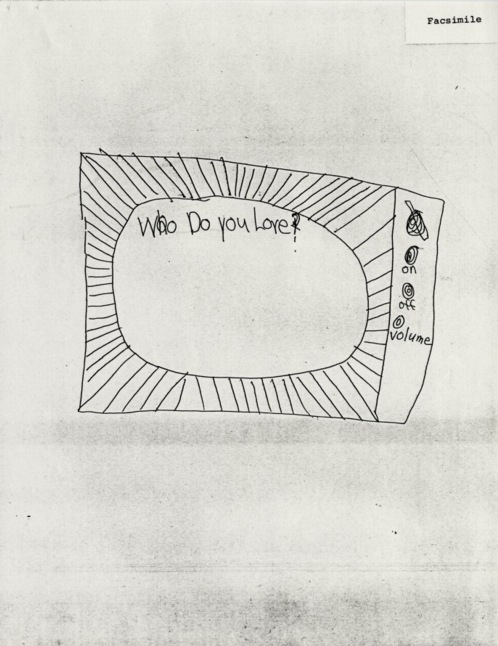