In 1969, Rene Block in Berlin published Blaues Dreiecken, Blue Triangle, an instruction-based edition by Blinky Palermo. It includes a large triangular stencil, a tube of blue paint, a brush, and a print made with same.
The instruction sheet reads, “Malen Sie mit Hilfe der Schablone ein blaues Dreieck über eine Tür. Verschenken Sie dann das Original Blatt.” [“With the help of the template, paint a blue triangle over a door. Then give away the original sheet.”] 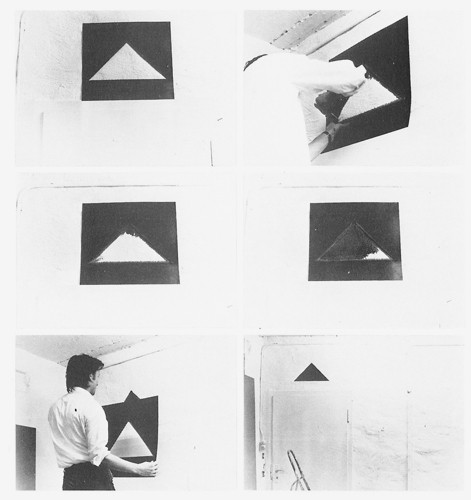 image: editionblockberlin.de
I wonder how often that has happened. The example shown at the Hirshhorn’s Blinky Palermo retrospective still includes the original print; the tube of paint looks undepleted, and that stencil doesn’t look like it was used to paint anything, including the triangle over the gallery doorway. [UPDATE: alright, I happened by the Hirshhorn again today, and took a closer look; the stencil does seem fresh, but the brush has been used at some point. And maybe the paint, too? Maybe Blinky painted each triangle print with the set itself? I hate ending everything with a question mark. This was 46/50, from Block, btw.]
All of which should surprise no one, I guess, conservators and exhibition practices being what they are.
Does anyone ever actually execute these things? Complete the artist’s instructions and realize, presumably, their intentions? Or have market forces condemned these kinds of works to permanent potentiality?
A Blue Triangle sold in Berlin for EUR34,000, and though it still contained the original, giveaway print, at least it did “contain traces of use.”
In 2009, artist Pierre Leguillon translated Palermo’s instruction to mean “give away the stencil,” and so he started just paintin’ Blue Triangles over doors all over the place. [Though it doesn’t appear that he used a Palermo edition, or even a stencil at all; he just taped them off. C’est complique.] 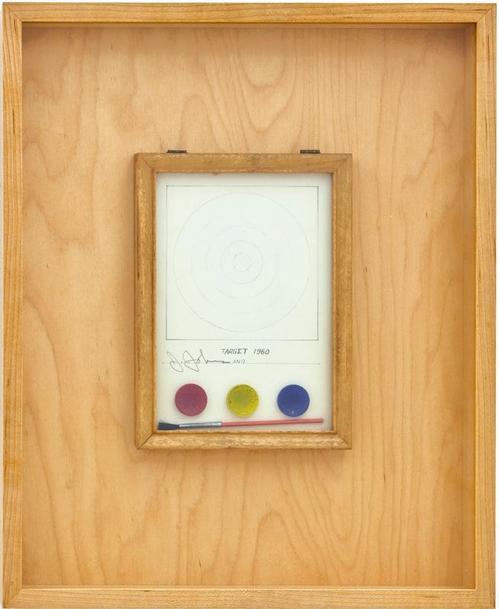 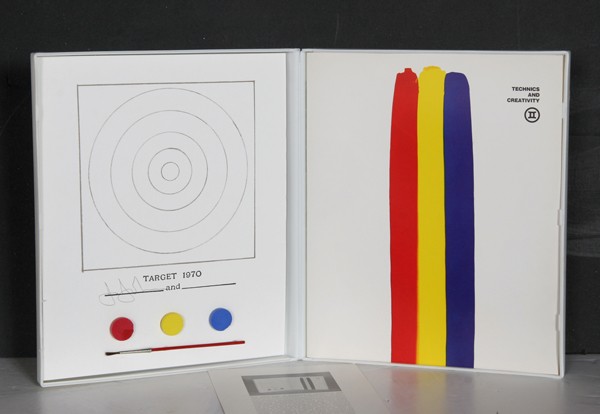 And yet, what happened to Target 1970, a mass-produced multiple similar to Do It Yourself (Target), which was included in MoMA’s catalogue for a 1971 Gemini G.E.L. retrospective? Those books are occasionally misdescribed as signed Johns editions [the signature is part of the offset print], and they’re offered for between $2500 and $75. Yet, even so, I’ve never seen one executed.
Does that mean the contingency of the void has been successfully translated to a different market segment? Or just that no one ever bothers to try to resell the “used” copies? Maybe it’d be interesting to buy a few of these Johns things, and give them to folks to execute.