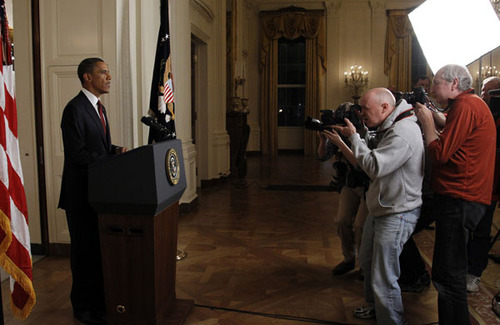 Photographers take pictures of U.S. President Barack Obama after he announced the death of Osama bin Laden live on television from the East Room of the White House on May 1, 2011.

So I was looking at Reuters White House photographer Jason Reed’s side view of a scrum of other photographers getting all up in the President’s grille while he was giving his Osama Bin Laden speech, and thinking, “But I saw him walk away. How the hell did that happen?”
And holy smokes, now we know. The Sforzian Backdrop has been retired in favor of the Obamian Re-enactment:

As President Obama continued his nine-minute address in front of just one main network camera, the photographers were held outside the room by staff and asked to remain completely silent. Once Obama was off the air, we were escorted in front of that teleprompter and the President then re-enacted the walk-out and first 30 seconds of the statement for us.

On the one hand, that’s no more staged a photo than any photo these guys take in the White House; think of those handshake photosprays with visiting leaders. They’re definitely not the kind of photo staging that WH photojournalists complain about, just the opposite, in fact, it’s standard operating procedure.
But if Reed hadn’t pulled back the curtain, I don’t think many people would have understood that from Reuter’s technically-accurate-but-now-somewhat-dodgy caption.
Ready To Record History [blogs.reuters.com via @markdubya, no relation, I assume]