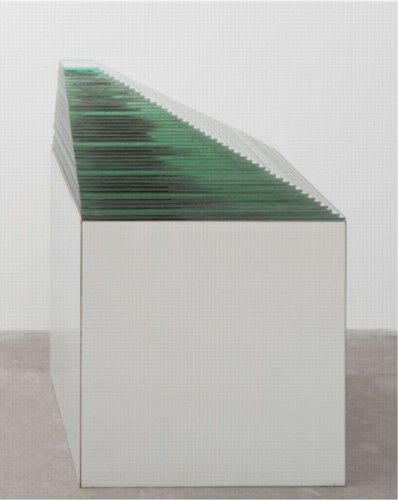 Mirror Stratum, 1966, Robert Smithson, image via moma
Robert Smithson’s Mirror Stratum is a longtime favorite of mine. These crystalline and strata sculptures are like abstracted geological or topographical structures, which is awesome enough. But these mirror [there’s at least one Glass Stratum piece, too, and a glass-and-map Stratum] stacks have this material simplicity, like a found object, that I really like.
MoMA has one [above] that’s 44 decreasingly smaller square mirrors, the largest of which is 25.5 inches on a side, all stacked on a pedestal. MCA Chicago has one, too, I see, with 32 mirrors, which sits closer to the floor. And it looks a little beat. Let’s call it a patina.
But my favorite favorite Mirror Stratum, which I’ve only ever seen once, is not designed to sit on a pedestal, but on a desk. It’s an adorable little stack of 20 mirrors, just 8.5 inches square and 5 inches high, which looks like the top half of the larger, earlier versions.
And in the Jan/Feb 1968 issue of Art in America, I found a great ad for it. It was made by Multiples, Inc., Marian Goodman’s editions publisher, in a stated edition of 25. Though it’s not clear to me whether the entire edition was actually produced. One of these days I should check. What I do know, is that I wish I’d picked one up back when they were $125 [or an inflation-adjusted $808].