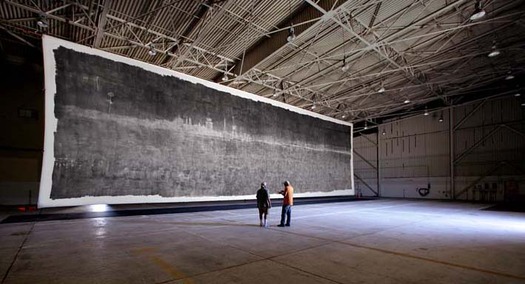 image: the legacy photo project
Where’d I get this link to The Great Picture, the world’s biggest photograph taken with the world’s biggest camera?
In 2006, a group of photographers working as part of The Legacy Project, which is documenting the history and decade-plus transformation of the decommissioned El Toro Marine Air Station into the 1,300-acre Orange County Great Park, turned the aircraft hangar into a pinhole camera, and made a 31×111 foot panoramic photograph of the surrounding landscape.
The Great Picture, as it’s known, was exhibited briefly a couple of times since 2006, and is now on view at UC Riverside’s Culver Center for the Arts, along with The Great Crate, and some other contemporary-style artworks and installations.
Which, hmm. 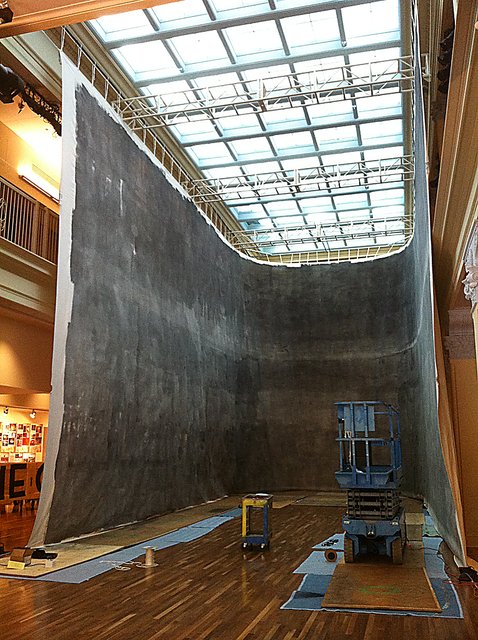 image via UCR Arts Block, picsplz
First of all, wow, what an installation. I guess the Culver Center is trying to keep Riversiders guessing whatever will they hang in that old department store next? On the bright side, this wraparound installation does make the photo look more panoramic, sort of like a peace dividend version of Paul Philippoteaux’s massive Cyclorama painting of the Battle of Gettysburg.
The post at Design Art Daily, is by Peggy Roalf, who, in 2005, bless her heart, had just published Colorama: The World’s Largest Photographs, just months before The Great Picture was taken. [See the greg.org post on Kodak’s Colorama photos.]
Coloramas were 11×60 foot transparencies, assembled from 18- or 36-inch rolls. The biggest photomurals, such as those done by Edward Steichen for his WWII-era propaganda exhibits at MoMA, were printed and assembled the same way, like wallpaper. Steichen’s folks then retouched the print and blended the seams using paint, and applied a nice coat of varnish.
All of which I mention here because while Legacy Project photographer Douglas McCulloh talked about The Great Picture’s intrinsic photographicity:

“The Great Picture is an object that to me is kind of a summation, a full circle statement about photo history. It’s a camera obscura which is where photography started. And the moment we hung it up, still wet, it was turned into pixels and broadcast around the world. So it starts at the beginning of photography, sums it up and becomes electronic overnight.”

It’s The Great Picture’s painterly qualities which stand out for me, which complicate the once-stark distinctions between painting and photograph, and their separate, often unequal histories.
Because The Great Picture was produced in negative directly on muslin canvas which had been covered–painted, actually, with brushes and mops–with gelatin silver emulsion. I’d even say that the all-over brushstrokes of the emulsion are the dominant characteristic, if not the content, of the image: 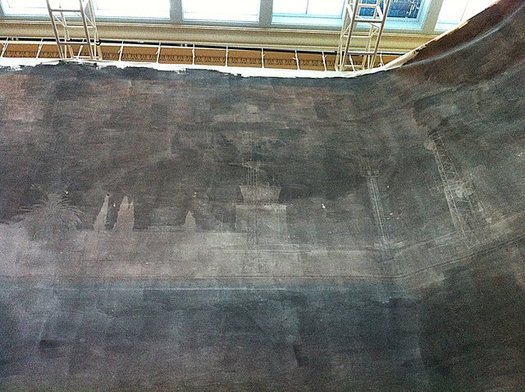 image via ucrartsblock
Which is pretty sweet. And which all reminds me of Wade Guyton’s massive Epson-printed monochrome painting last year at the Museum Ludwig in Cologne. Well, 25×40 feet seemed massive at the time. 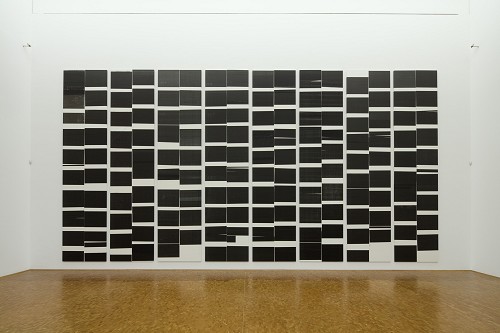