Via Tyler Green comes another awesome installment of Alan Taylor’s photoblogging journey through WWII for The Atlantic. This time, a selection of stunning Kodachrome transparencies made by the Office of War Information, selected from the Library of Congress’s growing digitized collection. And look what else is in there? The OWI was created in 1942 to propagandize domestically and abroad for the war. It sounds like a rather hotly contested mess of a government operation, and its domestic operations were basically defunded by Republicans and segregationists who complained that the OWI was actually using the war effort as an excuse to promote FDR, the New Deal, and racial equality.
A couple of things it did do: launch the Voice of America radio broadcast system, and take over the Farm Service Administration’s photography program. Which means the OWI was also involved in some way with Edward Steichen’s late 1942 MoMA photo exhibition, “Road To Victory,” which included many FSA images. In any case, the OWI certainly turned the center of New York City into their propaganda playground. I mean, holy smokes, check out these photos of “This Is Our War,” just one of an ongoing series of exhibitions they staged in Rockefeller Center. This was in March 1943, and focused on the United Nations, the 28 countries and governments in exile who first signed onto Churchill’s Atlantic Charter, which articulated the Allied principles for the war, and incorporated FDR’s Four Freedoms. Which are embodied here by four giant, allegorical, golden sword statues: a dog, a snake, a dragon [?] and a pair of unbound hands. In case you didn’t get the point from the inspirational photomural cutouts or the giant, somewhat awesome V for Victory, the exhibit also featured “amplifiers at each end broadcasting speeches by Roosevelt, Churchill and Chiang Kai-Shek every half hour.” I know she wasn’t physically delivered into the world until 13 years later, but I wonder if Cady Noland wasn’t somehow born right here on Fifth Avenue. 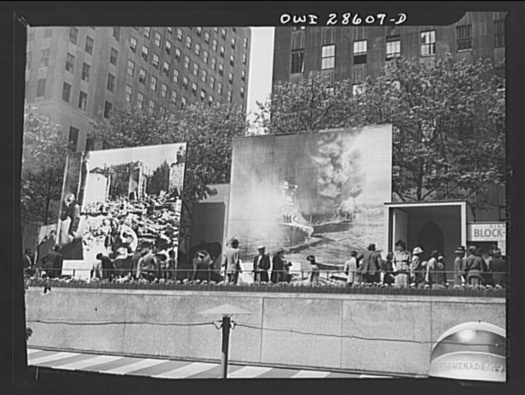 But wait, there’s more! Here’s how the NY Times reported the opening of the OWI’s next show:

The fanatical scream, “Hell Hitler!” ripped through the air in Rockefeller Center. It took startled crowds some time to realize that the cry and the bark of Hitler’s voice came from some captured German sound films. 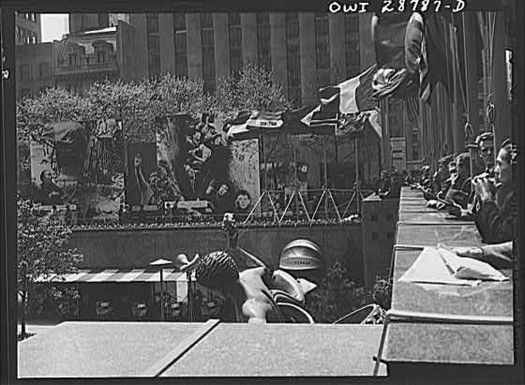 For “The Nature of The Enemy,” the OWI ringed the skating rink with massive photomurals showing Hitler, bombed out refugees, crying Chinese peasants, and flaming battleships. If you bought a war bond, you could sign a bomb that’d get dropped on Berlin. 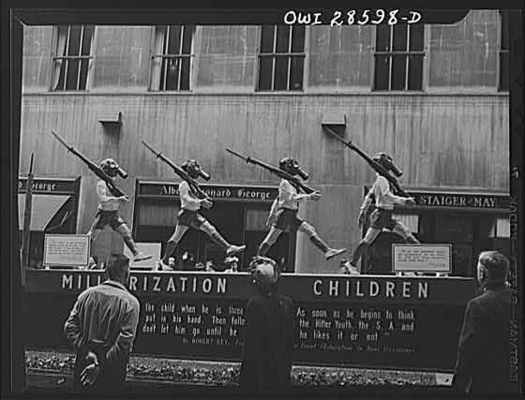 Along the Promenade, a half dozen dioramas were, like the giant banners running the length of the buildings, just depicting the facts, ma’am: “THE ENEMY PLANS THIS FOR YOU”: “Desecration of Religion,” Militarization of Children,” “Concentration Camps,” &c., &c. 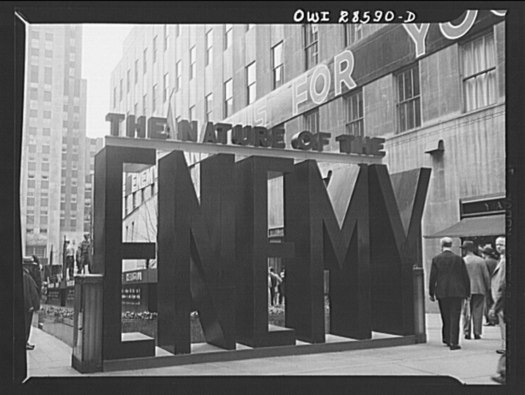 I’m sure the uneven spacing and kerning of this otherwise awesome [painted plywood? were there cabinetmakers on staff whose job consisted of building giant letters?] sign/sculpture was frightening enough to cause a dozen Madison Avenue ad layout men to enlist on the spot.
The Nature of The Enemy exhibition, Rockefeller Center, June 1943, 56 images [loc.gov]