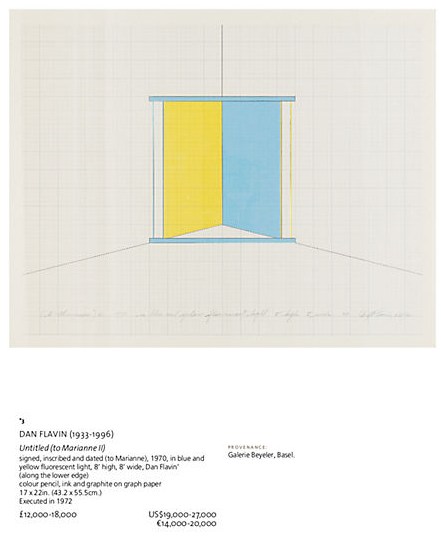 When is a Flavin not a Flavin?
Lot 3 in the upcoming contemporary sale at Christie’s London is a work by Dan Flavin, or at least part of one. Untitled (to Marianne II) is a signed diagram for a 1970 corner piece, entirely typical of the type of certificate Flavin used to issue when he sold a piece.

It includes instructions in Flavin’s hand, “in blue and yellow fluorescent light, 8′ high, 8′ wide.” But there is no hardware included in the lot. Which makes it the inverse of the scenario I wrote about for the NY Times in 2005:

Each of the more than 750 light sculptures that Flavin designed – usually in editions of three or five – were listed on index cards and filed away. When one sold, the buyer received a certificate containing a diagram of the work, its title and the artist’s signature and stamp. If someone showed up with a certificate and a damaged fixture, Flavin would replace it. But without a certificate, the owner was out of luck. Today, Christie’s won’t even consider a Flavin sculpture unless it’s accompanied by an original document.

And looking at the estimate, a scant £12-18,000, it’s obvious, but unstated, that Christie’s is not presenting this as a Flavin light work, but only as a work on paper. Ephemera, even. Otherwise, it’d be worth 50 times that, easy. 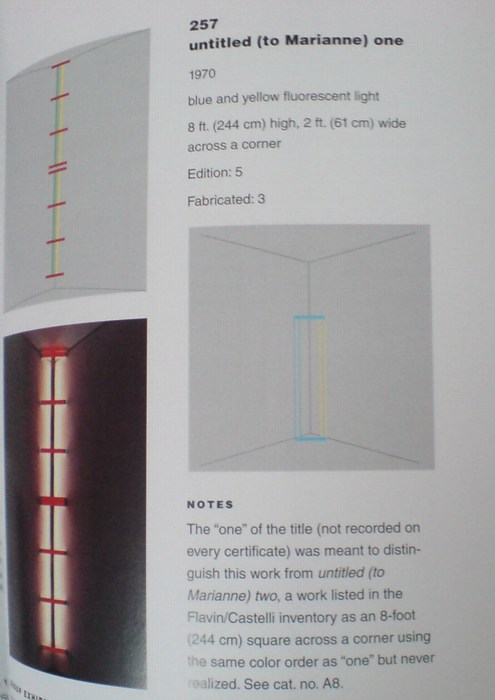 But wait, there’s more! Tiffany Bell and Michael Govan’s catalogue raisonne, Dan Flavin: The Complete Lights, lists the work, Untitled (Marianne) 2 [which is how it’s actually signed] only in the Appendix, as a “companion” to Cat. 257, Untitled (Marianne) 1, which was shown in Flavin’s October 1970 show at Castelli. Three of the declared edition of five were fabricated. One is in the San Diego Museum of Contemporary Art’s collection, and has been widely exhibited since.

Marianne 2 was listed in Castelli’s inventory, but “there is no record indicating that this work was ever fabricated.” Yet the certificates usually didn’t get made until a work was sold. And there are plenty of examples of works in the main CR which were nevertheless not fabricated.

And Christie’s says the work was “Executed in 1972.” And, I guess unsurprisingly, the auction house doesn’t mention The Complete Lights and omits the usual “Literature” recitation at all. [Not that I think there’s anything nefarious; the whole catalogue feels atypically ersatz. If the art market’s booming again, its excesses are not being lavished on the publications team at Christie’s South Kensington.]

Anyway, the provenance of the diagram/certificate is Galerie Beyeler in Basel, so no foolin’ around there. Except that maybe this is another situation like Giuseppe Panza’s, where the nature of the work, and the strictures on fabricating and hardware, etc. were vague or in flux, or lost in translation and never properly squared away. There were tons of unsold, hence unrealized editions in Flavin’s estate when he passed away, so maybe the notion of resale rarely came up.
Or maybe there’s more to the story of Untitled (Marianne) 2 than Christie’s or even The Complete Lights is telling. If there were more documentation about the 1972 execution of the piece, perhaps…. A story about losing the hardware, or inadvertently throwing it out, maybe how this piece had different instructions, or the practice was different at the time, or something. Anything. But so far, I’m finding nothing. Very odd, and the possibility for a, who knows, really? A score? A pass? An odd lot tomorrow.

[UPDATE: It was nice to hear from the folks at the Flavin Estate, who say that Flavin would specifically write “CERTIFICATE” on his certificates, and this is not one. It is as Christie’s presents it: a work on paper. Neither Christie’s nor the Estate provided any additional insight into the “Executed in 1972” thing, though. And re-reading the catalogue raisonne text describing Marianne 2 as being “in the Flavin/Castelli inventory as an 8-foot square” which was “never realized,” it still sounds like it had some status as a light work, not just a drawing or study. But the absence of hardware renders that moot. Except, again, for the “Executed in 1972” thing, which– Anyway, net net, it sold for just £20,000.]