A finalist on a 2006 ABC reality series spent years inventing a car seat that would withstand the type of crash that killed his own infant son. Skyscraper evacuation technology experienced a surge of innovation in 2002. And six months appears to be the amount of time required for Japan’s nascent personal earthquake/tsunami survival shelter industry to go from disaster recovery to product launch. 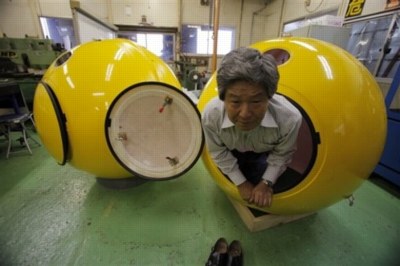 image: ap via guardian
Here is Mr. Shoji Tanaka, CEO of the 10-person, Cosmo Power Co., who has, naturally, removed his shoes to demonstrate the firm’s new Noah disaster shelter. The fiberglass pod fits four, has airholes [presumably watertight], and can “also be used as a toy house for children.”
One would assume the 200-300,000 yen price could be offset by selling advertising. In the event of an actual emergency, live feeds of Noahs being plucked from the receding sea would provide great logo placement opportunities. Assuming the Noah’s occupants survived, of course. 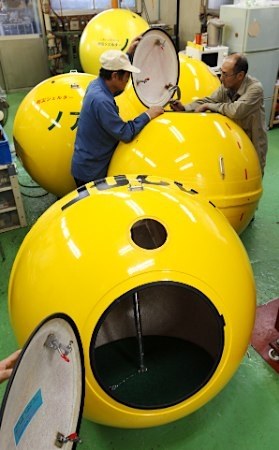 image via goo.ne.jp
Hmm, maybe it’s better to base advertising revenue projections on pre-disaster exposures. Noahs will surely be parked outdoors, in precious parking spaces, on roofs, hanging off of balconies, someplace from whence they can float clear from debris. Ad network them together, and paint or paste the pitches on the side with saltwater-soluble ink or glue.
Anyway, Cosmo has apparently been too busy taking 500 or 600 orders for Noah pods, they haven’t had time to update their homepage for two years. Actually, the Shelter Noa was registered with the patent office in 2008. And yet as of Friday they had only delivered two. 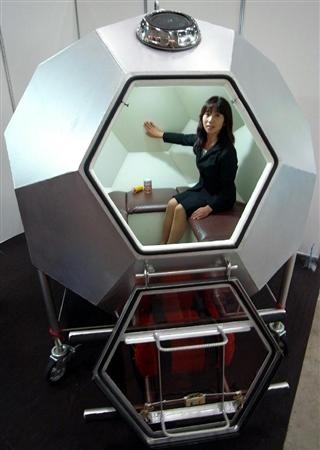 That goo.ne.jp link led to an even better related story, the launch the very same day of the Kimidori Baria 4S, a “soccer ball-shaped” disaster shelter. Because when you’re a prefabricated geodesic dome manufacturing company like Gifu-based Kimidori Kenchiku, the best obvious solution, whether it’s for a dog house, a comic book coffee house, or a tsunami survival pod, is a dome. 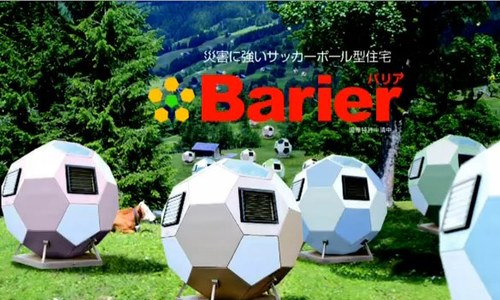 Hmm, on Kimidori’s YouTube channel contains three seaworthiness testing videos. A warning: these might be too upsetting for sensitive viewers and/or actual tsunami survivors.
For example, here is a Barier 4S floating in a portable pool. 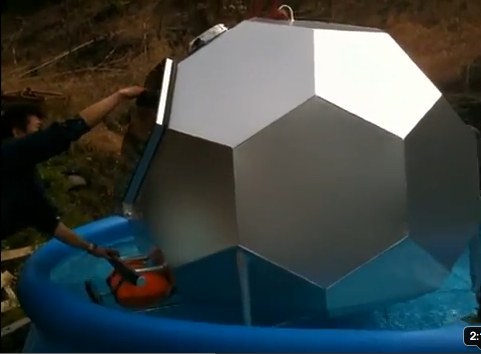 In this open water test, the Barier 4S must endure the wake of a small ski boat. 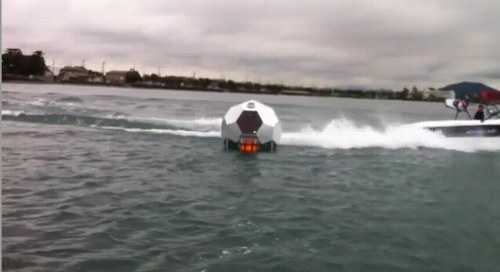 The third video features a new tsunami shelter shape, a dodecagonal tube, which holds six and can be walked safely to shore like a hamster ball. The first videos were posted within weeks of the actual earthquake itself. I guess it’s a fine line between ganbaro! and too soon!
UPDATE Or too late. I’d meant to post a link to Ken Isaacs’ 1970 dodecahedron pod for Pop Sci, which was designed for another type of escape, when the fellas from Ro/Lu sent along the link to n55’s micro dwellings (2005), the water testing for which included 100% more naked Danes than the Barier.