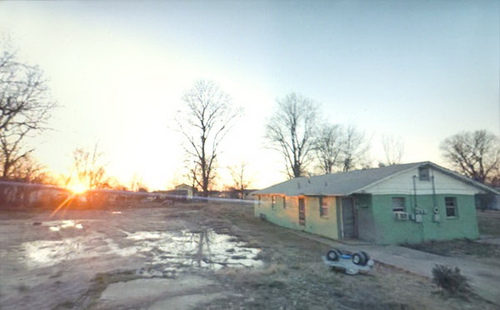 At MoMA yesterday, I was talking about some Google Maps and Street View projects with a trustee, who was all, “There’s an artist in the New Photography show that uses Google Maps, they’re stunning!”
And it only occurred to me at that moment that the Doug Rickard in New Photography 2011 is the Doug Rickard of American Suburb X, and that he was showing his incredible series, A New American Picture. [The show opened last week; I hadn’t seen it, and the galleries were closed yesterday.]
I really should be discussing it more, because A New American Picture is pretty much the most successful and powerful Street View-based art project out there. Rickard’s images are haunting, and he’s right when he said [somewhere, I’ll find it later] that these photos could not be taken by a camera-wielding photographer; the presence of a human with a lens would destroy the scenes.
Which, as I type it, makes me think of the old Michelangelo chestnut about finding the sculpture in the block of marble. In a way, A New American Picture feels like the photos Rickard uncovered in Street View. Now I’ve got to get back to the museum and see the actual show.
American Suburb, A New American Picture, by Doug Rickard [americansuburb]
New Photography 2011, Sept 28 – Jan 16 2012 [moma.org]
Previously: On Bremser on Street View