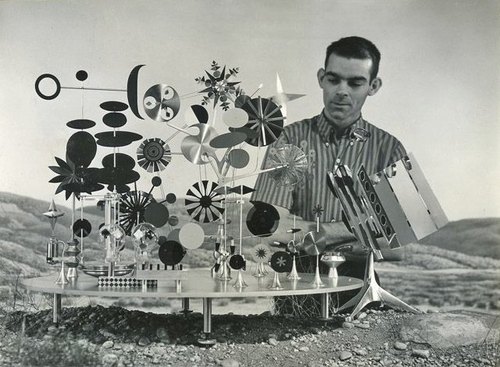 I was very saddened to learn that the great designer John Neuhart passed away last month. He and his wife and fellow designer Marilyn were early and influential colleagues of Ray and Charles Eames, and have been heavily involved in documenting and propagating the history of the Eameses and the Eames Office.
I have long admired Marilyn Neuhart’s work with Alexander Girard, but I most wanted to meet John someday and ask him about his first and [to my mind] greatest project for the Eames Office, creating the Solar Do-Nothing Machine [image above via the scout]
In 2000, Neuhart told the LA Times the story of the making of the Solar Do-Nothing Machine:

I was hired as a graphic designer in the summer of 1957 and was immediately put to work building the mechanical motion displays for the Alcoa solar energy toy, christened the “Do-Nothing Machine.” (Part of a national ad campaign forecasting future uses of aluminum, the Eames Office contribution was one of many solicited from designers nationwide.) Past experience building model airplanes, bookshelves and learning to cut metal in my jewelry class at UCLA had hardly prepared me for what I faced. And the pressure was on; several starts and attempts had been made before I arrived, and the office was facing a looming deadline. We were experimenting with new technologies for which there was little existing experience to fall back upon, adding pressure to the project.
I battled my way through four months of ad hoc, trial-and-error attempts fraught with anxiety. Would I still have a job if this fails? Would my 7-month-old marriage survive the all-night sessions and constant stress? Would I ever get back to graphic design? Was Parke Meek’s ulcer contagious? Finally, I seemed to be on the brink of success. I managed, with advice from co-workers Don Albinson, Parke and Charles, to arrive at a workable system that harnessed solar energy through photovoltaic cells to drive six small electric motors that set in motion a series of decorative pinwheel shapes mounted on an elliptical aluminum platform. We had enough to produce the desired end result–the photograph that would appear in national magazines. My next lesson about the Office was that no one was allowed to even contemplate basking in the glow of success (or to expect praise). It was always on to the next project–in this case, shooting the photograph, wherein I was destined to learn the answer to the age-old question: What did Ray Eames actually do?
At noon one day we started to set up the solar machine and the lights, and by 3 a.m. the next morning we had it placed on a mound of dirt and rocks in front of a sky backdrop that suggested a desert scene. We were all exhausted and irritable by the time Charles started shooting the 8-by-10 images. After a couple of hours, he was on the last sheet
of film. Suddenly Ray screamed, “It isn’t shining!”
Charles emerged from under the camera’s black hood, his hair standing up like a cock’s comb. We all groaned. “What isn’t shining?” he yelled at Ray. “The diamond isn’t shining,” she moaned. “Does anyone know what she is talking about?” growled Charles. “I do,” I said. “She means the diamond-shaped intermittent wheel at the upper part of the machine.” There was stunned silence. Getting it lighted meant more scrambling onto ladders and readjusting the lights. “OK,” said Charles, “If you can get a light on it within 10 minutes, we’ll do another shot.” I ignored the exasperated looks from my fellow staff members and climbed to the top of the ladder to maneuver the light around until Ray shrieked, “It’s shining! It’s shining!”
Charles made the last exposure and we all went home. The next day, when we looked at the six sheets of developed film, you can guess which one was chosen–the one with the shining diamond. I had just passed another rite of passage and now understood Ray’s position in the Eames equation: shining. And, yes, I had a job, my marriage survived and, after more tangential trials by fire, I finally did get back to graphic design. Parke had surgery for his ulcer and made Charles pay for it.

And here is a very nice interview from last year, when Marilyn released her encyclopedic reference book, The Story of Eames Furniture: